Could fraudsters still be wearing ties and shoes? You have to think twice after reading this.

Panhandlers are the most common people we see on the street and when you think about their status, most of the time, you hand them money. Right?

Nowadays, fraudsters can be in any form, status, or mostly scheme, let’s take this Man from Brighton, Michigan who seemed to be a normal panhandler doing his best to survive, but after those managers at the dealership offered him a full-time job that paid $10 per hour – he arrogantly rejected the kindness and said, “I make more than any of you.”

To be honest, I am personally aggravated by his response.

“Initially, those at the dealership attempted kindness and compassion, with management offering the “homeless” man a full-time job that paid $10 per hour, however, they got a reaction they never expected as the man scoffed at them and said, “I make more than any of you.” That’s when the staff at the Honda dealership had enough and decided to come up with a sign of their own.

The dealership’s sign: “Please do not give anything to this panhandler. We offered him a full-time job at $10 per hour. He said, ‘I make more than any of you,’ and he did not want the job. Please donate to a more worthy cause,” 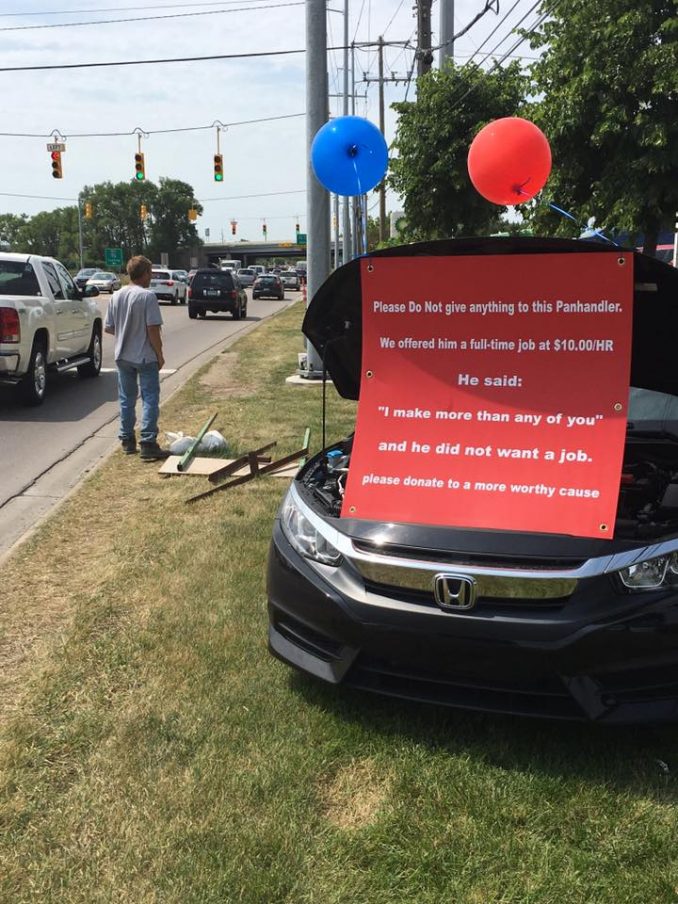 What the dealership did was a good idea to expose the filthy attitude of this scammer.

Brett Paulson also exposed this scammer with a photo of the sign and posted it on social media that went viral.

“This guy walks in front of where I work and yells profanities at employees, customers, and people driving by and he has been offered a job here. He denied the job. His wife has also died twice….that’s tricky.”

“She died last fall which he said caused him to be a bum because she ‘took it all to her grave.’ Now today he said she died 2 days ago.” Paulson added.

Eventually, after the sign of the dealership took too much attention, they decided to take it down.

Dan Golem, a resident of the area also shared his thoughts about the man where he said, “It’s a scam, People like me, people like you, we’re working trying to provide for our families, and they’re just standing there.”

He was later on arrested but got out of jail in no time and back into the same streets for his scams.

Watch it here: Youtube/Click on Detroit

This man is just one of many scammers out there.. previously in California, a pregnant woman was buster for begging money in the street but was spotted driving away with her Mercedez Benz as per WGN9.

Now think again whenever you are handing your hard-earned money.