When comparing the reactions of both Trump and Obama after similar situations it gives us more insight into their character.

Days after both incidences shows exactly what each of their priorities were.

A Navy SEAL operation was given the green light right after our new president Donald Trump was sworn in. The mission went forward in January and we tragically lost one of our SEALs . William Owens was his name, he was from Peoria, Illinois.

Some claim that the mission was “botched” because of the casualties, even though they hit 14 high priority targets. They blamed Trump for not being in the situation room. There is suspicion that Al-Queda was tipped off. 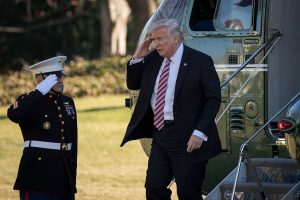 It has also been asked where Obama was during an 8 hour terrorist assault in Benghazi, Libya.

“He was obviously aware of the strike occurring,” Spicer said on the Monday after the raid. “He was kept in constant contact Saturday night of the status of the mission, both of the success that it had and the tragic loss of life that occurred to that member.”

President Trump was actually scheduled for a meeting with the President of South Korea, Hwang Kyo-Ahn during that time. Liberal media wouldn’t let go of the fact that Trump wasn’t in the situation room. As they went into painstaking detail about where Trump was.

There seemed to be no questions about the whereabouts of Obama during Benghazi. An Obama aid even went as far as stating that it’s an “irrelevant fact”. Even though there wasn’t even an immediate rescue attempt sent out.

the night of the Benghazi terrorist attack that saw the death of four Americans, President Obama was confirmed to have taken a jet to attend a Las Vegas fundraiser.

After missing her 3 a.m. phone call to convene a State Department security group to dispatch a rescue team to the diplomatic compound, Hillary Clinton would go on to blame the terrorist attack on a protest that never happened, while at a service for the fallen diplomats Ambassador Christopher Stevens and Sean Smith and slain Navy SEALs Tyrone Woods and Glen Doherty.

After slain Navy SEAL William Owens came home to the United States after his ultimate sacrifice during the Yemen operation, President Trump, without fanfare or media publicity, suddenly left the White House on Marine One to attend the transfer of remains at Dover Air Force Base.

Obama’s priorities were in parties, balls, celebrities and vacation while President Trump is busy working for our country and paying respects to the SEAL that lost his life.