Donald Trump is full of surprises! You never know who you’re going to see at Trump Towers next. One thing is for sure, he is being thorough and making sure to bring on the best of the best. 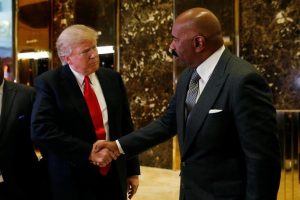 After posing for photos with Trump in the lobby, the comedian told reporters that he came to meet with Trump after the transition teams of both President Obama and Trump reached out to him last week.

“I came and talked to the guy who’s going to be the 45th President of the United States,” Harvey said. “[We spoke about] housing for urban development…[to] bring some positive change in the inner cities. He wants to do something. He realizes he needs some allies in that department. He seemed really sincere about it.”

Harvey said the meeting was “successful” adding that the pair spoke about everything from golf to their mutual friend Mark Burnett, and of course “Family Feud.”

To those that follow President-elect Trump closely, it will come as no surprise that he is making an effort to solve the problem in America’s urban environments. Trump has been consistent in his advocacy for change in American cities, even raising the issue during the presidential debates.

Bringing Harvey in to form a plan on the issue shows the Trump Administration is leaving no stone unturned ahead of the oath of office. Harvey adds to the diverse team Trump has put together in order to tackle the real problems every day Americans face.

Donald Trump is a successful man and he knows exactly how to plan for success, especially now as he approaches the White House.

I’m excited to see the work he does for America.