President Donald Trump’s efforts to slash environmental regulations have been so extensive that nanny-state liberals are going spastic. If the government doesn’t regulate each and every industry out of business, we’ll have Waterworld before the 2024 election, they cry.

The next time one of your left-leaning neighbors starts whining about global warning, you can hand them a can of Play-Doh and send them off to their safe space with something to think about. Can people be trusted to run their own lives and manage their own affairs?

Progressives don’t think so. They need the government to tell them what to do and think every waking moment of the day. That way, they don’t have to take any responsibility for their own actions and thoughts. “This question assumes that regulation is the only path to environmental protection,” Environmental Protection Agency Administrator Andrew Wheeler told the Detroit Economic Club. “Innovation and technology have lead to remarkable environmental progress and often deregulation is necessary to spur on that innovation.”

President Trump chooses to empower American industries to actually do business. Each and every company is already liable under our system of civil justice for any injury they do to anyone, through neglect or malice. For any actual harm, there is a remedy in the courts. Lawsuits are bad for business.

Scientific experts, including members of the EPA’s own scientific advisory board, are frantic because staffs are being pared down to the core and a sharper pencil applied to their budget approvals. It was so much easier to pad the accounts under Barack Obama. There isn’t any need for millions of miles of red tape to snarl the works, the President insists. “It’ll kill millions of jobs. It’ll crush the dreams of the poorest Americans and disproportionately harm minority communities. I will not stand for it.” 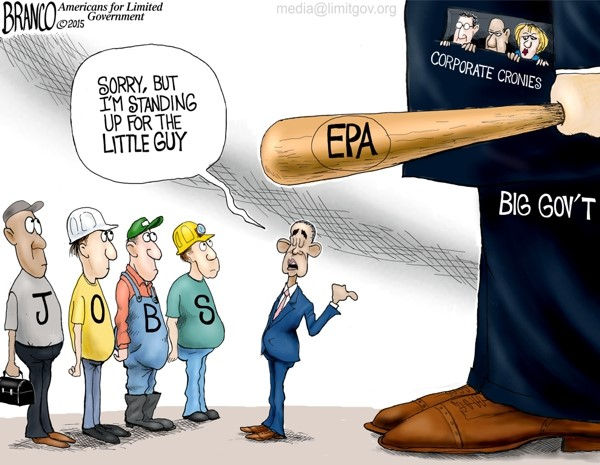 “From day one my administration has made it a top priority to ensure that America is among the very cleanest air and cleanest water on the planet,” Trump points out. “We want the cleanest air. We want crystal clean water and that’s what we’re doing and that’s what we’re working on so hard.” President Trump relies on getting the federal government out of the way and handing the ultimate responsibility for proper safety and pollution control to the states, industry groups, and individual companies, where it belongs.

Soros inspired progressives are all frantically jumping up and down this week over the President’s latest triumph. The EPA announced “it will rescind Clean Water Act protections from many streams and wetlands.” Liberals are in tears, but all it really means is that the water in your kitchen sink will no longer be classified as a wetland. Under Obama’s rule, it’s subject to federal scrutiny before you can do the dishes.

The regulations are “unnecessary” ones. Director Wheeler is often criticized in the media while they ignore his achievements, and he has a problem with that. If the American public believed what they heard in the news, “they’d think the air’s gotten worse over the last 49 years when actually the air’s gotten better. My frustration with some of the media is they don’t tell this side of the story.”

President Trump wants every American to know that, “in addition to clean air and clean water that means being good stewards of our public lands, prioritizing cleanup of our polluted lands that threaten our most vulnerable citizens and threaten them very dearly, and implementing pro-growth policies to implement innovations and new technologies which improve American life and America’s environment.”