Before you know that you’re infected, there is a big chance you already passed Wuhan coronavirus to as many as four other people, and the scary thing is that it might be intentional. That would explain the level of paranoia in the global response. The pandemic is now officially a world health emergency. Spooky ties to bio-weapons labs have many wondering if the exponential spread and economic chaos was on purpose.

Before you know is already too late

Based on a research study made public on Friday, health organizations around the world are jumpy. “There’s no doubt after reading this paper that asymptomatic transmission is occurring,” Dr. Anthony Fauci explains. “This study lays the question to rest.” he’s the director of the US National Institute for Allergy and Infectious Diseases.

There is “emerging evidence the virus can be spread by someone who is infected but not yet showing signs of being ill, such as fever, cough and other respiratory symptoms,” Dr. Nancy Messonnier warns. She also points out that screening for the virus doesn’t work. If it comes up negative, the virus could still be lurking. It takes 14 days to incubate. She should know. she is Director of the National Center for Immunization and Respiratory Diseases.

On Thursday, the World Health Organization declared a public health emergency but backed way off on recommending travel restrictions, saying they “were not needed.” Yes, they are, said CDC Director Robert Redfield on Friday. The U.S. government also issued an emergency declaration and a whole flurry of travel restrictions. “I want to emphasize that this is a serious health situation in China.” Even though “the risk to the American public is currently low, our goal is to do all we can do to keep it that way.”

The spread of the disease is obviously exponential. “epidemics are already growing exponentially in multiple major cities of China with a lag time behind the Wuhan outbreak of about 1-2 weeks.” To put that in perspective, Harvard epidemiologist tweeted, “HOLY MOTHER OF GOD—the new coronavirus is a 3.8!!! How bad is that reproductive R0 value? It is thermonuclear pandemic level bad.” 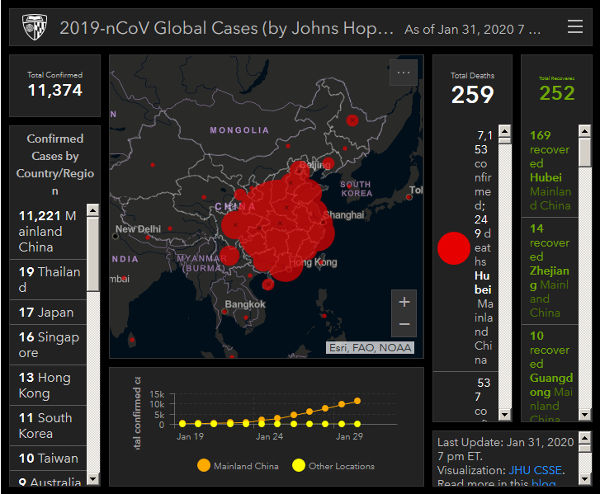 The seriousness of the threat is underscored by an incident that occurred at March Air Reserve Base, where the first load of American evacuees landed. They were all placed in quarantine for what was originally supposed to be 72 hours. When that was changed to two weeks on a voluntary basis, one of the individuals tried to escape Wednesday night and found out it’s not so voluntary after all. The person was recaptured and the whole group was put under a blanket quarantine order for a two-week hold, the first such order in 50 years.

Between lockdown quarantines, travel restrictions, border closures, flight cancellations and disruptions to commerce, the global economy is on the brink of chaos. Virtually all commercial flights in and out of China have been suspended. Governments around the world are working frantically to get their stranded citizens out of harm’s way.

In the part of China at the epicenter of the outbreak, roads are sealed off. All public transport is cut off. That has everyone worried about “how long parts of the country can continue to remain under lockdown, both from the perspective of making sure they are supplied with food and other necessary items, and from an economic point — both the national finances and people’s personal pocketbooks will be taking a massive hit from next week,” Reuters notes.

China may have invented the “neutron bomb” of bio-weapons. One that causes chaos, disability, distraction and economic damage — without actually wiping out an entire population. Right in the middle of the current outbreak is the Wuhan Institute of Virology, “the only declared site in China capable of working with deadly viruses.”

For years, Wuhan scientists have been studying coronaviruses, “including the strain that causes Severe Acute Respiratory Syndrome, or SARS.” It might have escaped. Conveniently nearby is The Wuhan Institute of Biological Products, widely rumored to be part of the Chinese Bio-weapons program. “The biosafety lab is located about 20 miles from the Hunan Seafood Market that reports from China say may have been origin point of the virus,” biological warfare expert Dany Shoham confirms.

Three recent arrests show that we may be looking at a virus created in the lab using stolen U.S. biochemical technology. The professor at the head of Harvard University’s Chemistry and Chemical Biology Department was arrested for lying to authorities “about his affiliation with the Wuhan University of Technology (WUT) in China and a contract he had with a Chinese talent recruitment plan to attract high-level scientists to the country.”

Along with him, student Yanqing Ye admitted under interrogation that “she held the rank of lieutenant with the People’s Liberation Army.” She’s charged with “accessing U.S. military websites and sending U.S. documents and information to China.” Also last week, Zaosong Zheng was “indicted for trying to smuggle 21 vials of biological material out of the U.S. to China” in his sock.