A Louisville, KY woman pays BIG TIME for a tweet she didn’t think twice about. She took to Twitter with her hate for Trump and immediately regrets it. 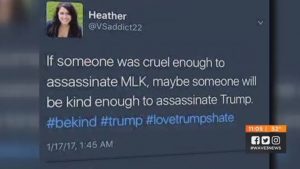 Soon after, the sender of the tweet — Heather Lowrey of Louisville — was in trouble, WAVE-TV reported.

A screenshot was taken of her tweet, and then other social media users alerted Lowrey’s employers, the station said. Her social media accounts were soon taken down, but it was too late.

First off, the Secret Service interviewed Lowrey and opened an investigation on her, WAVE said.

“Any time threatening communications like that are made, we always conduct an investigation,” an agent told the Courier-Journal.

What’s more, Lowrey’s employers — four of them — gave her the ax.

Among them were the Va Va Vixens — Louisville’s “largest and most popular burlesque and variety troupe,” according to the group’s website — who who said Lowrey quickly got the big hook offstage.

“Please, know that we, at Va Va Vixens, do not condone the behavior of Heather Lowrey,” the group’s statement read, according to WAVE. “She was dismissed the moment we were informed of this incident. We have a zero tolerance policy for such. It’s no secret that we are in the midst of a divided nation. With so much hate and anger in the world, our hope is to be a sanctuary that welcomes all walks of life with open arms. We do not condone hate by any party and will not partake in it. We in no way support negative behavior or malicious intent from anyone.”

And the Heyman Talent Agency noted on Twitter that Lowrey is no longer contracted with the organization. The Courier-Journal said it added that “our company does not share the same views, nor opinions as Heather Lowrey. We would never condone this behavior and have zero tolerance for hatred and negativity.”