Is Carson INSANE? Look at the HORRIFYING WARNING he just sent out to America…

This could get INTERESTING! 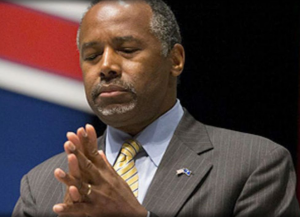 Last year, Dr. Ben Carson made an appearance on a daily show where he talked about various issues such as violent protests and law enforcement shootings, noting that it was “not terribly surprising to see the focus on racism and divisiveness”.

“I would encourage people to read a little book, it’s not that long, called Rules for Radicals, by Saul Alinsky, and you can see how the playbook works, and what they need to do. It’s to stir up strife, and to stir up division, and discontentment, as opposed to focusing on the real issues,” he told SiriusXM host Alex Marlow.

“What you must recognize is that they’ve been working on this for decades. And they just need one more term. That’s all they need to culminate their efforts, so they can get control of the Supreme Court, and the federal court system. After they have that control, it doesn’t matter who the President is,” Carson warned.

He even ‘predicted’ that the 2016 election would be “a real knock-down, drag-out” fight, in which “there will be no tactic that will not be used.”

Ben Carson pointed to Detroit as a perfect example of progressive devastation, reports Ending The Fed.

“It was once the most prosperous city in America, and from there has gone on to become the biggest bankruptcy, after decades of progressive leadership,” he observed.

“That should tell anybody – Democrat, Republican, independent – that there’s something wrong with the course that’s been staked out on, and that you really need to stop and do something different. You know, the definition of insanity is doing the same thing, and expecting a different result. We’ve got to stop being insane, and start exercising common sense,” Carson urged.

What do you think about what Dr. Ben Carson has to say?