A group of “current and former intelligence officials” told Fox news that the new focus is on controlling the “disease narrative inside the U.S.” to cast the blame “anywhere but Beijing.” With COVID-19 making the rounds, Beijing has the propaganda teams working overtime, and they’re also ramping up their espionage efforts to dig up material they can use to “manipulate” the narrative in their favor, experts confirm.

China’s going all out to avoid blame

Everybody is already convinced that China was behind the coronavirus outbreak but they’ve shifted into hyper-drive, attempting to find something they can use as leverage to help pry their way out of taking the blame. The People’s Republic has been spying on America for decades, fishing for all the “critical information, trade secrets and technology tools” they can get their hands on. Now they’re digging for what we know about viruses, so they can use it against us.

The whole idea, one defense official notes, is that the Chinese are determined to steal our technology, especially the kinds related to military readiness. They already know China has “critical components of parts,” if not the “parts themselves,” that have been used in sensitive U.S. defense technology. There is evidence that Chinese spies are peeping into defense department computer windows.

There are expected to be serious repercussions for unleashing 2019-nCoV on the world. “Most assuredly, the American people will demand some kind of financial response, if not outright reparations in the many billions.” So, they shifted their efforts to looking for ways to blame the American capitalist devils. 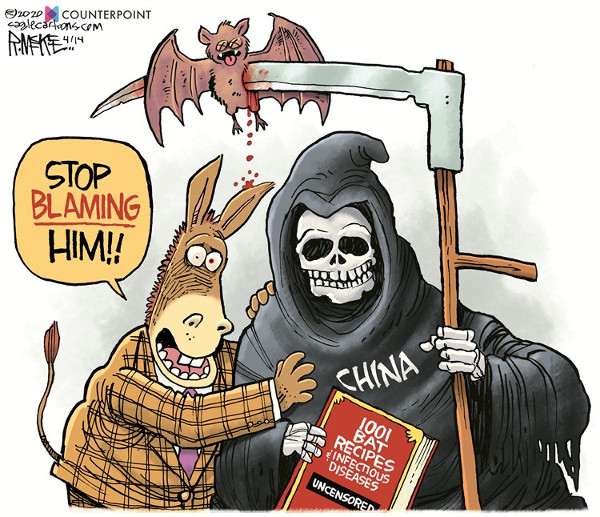 One thing that’s notably different about what’s happening now, a retired Pentagon officer points out, is that China’s propaganda mill is in full production. Media operations, he says, are “in full swing.” To Xi Jinping, “It is about saving face for them. It’s about leaking out false information, even to our [spy agency] apparatus.” It’s critical they find someone to blame.

“There is hacking into computer systems, very active human recruiting of U.S. citizens out of their embassies, consulates, and spies operating under diplomatic cover or non-official cover,” retired Special Forces Col. James Williamson confirms. “They are extremely active against U.S. defense contractors and in and around technology industry hubs.”