After being silent, the Country music legend Travis Tritt is now over it and voiced out about the radical left and the consequences of woke culture.

Travis Tritt can no longer hold back his contempt for woke culture after two weeks of scandals surrounding the Olympics.

After Chelsea Wolfe, a man who believes that he is a woman was announced as an alternate for the USA Olympic team last June 12, Wolfe’s old post then became viral where he posted last March 25, 2020, that “My goal is to win the Olympics so I can burn a US flag on the podium. This is what they focus on during a pandemic. Hurting trans children.”

Weeks after the post went viral, another Olympian athlete followed that also wanted to be noticed. And this person was no other than Gwen Berry, the one who earned the right to represent the U.S. in the Olympics after placing third in the hammer throw at the U.S. Olympic track and field trials on June 26. Berry turned her back during the National Anthem and then held up a t-shirt that read “Activist Athlete.” Attention seeker right?
Due to her behavior, she made it in the headlines of the news while the two women who placed higher than her received almost no attention.

“The anthem doesn’t speak for me. It never has,” Berry said after being called out for her disrespect of the National Anthem. 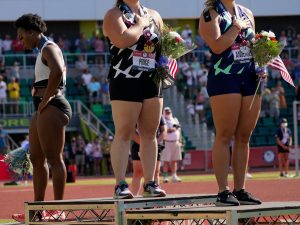 Many Americans are angry that Wolfe and Berry are still allowed to be part of the U.S. Olympic team, and are arguing that, in order to represent America, an Olympian should actually support America.

Travis Tritt seems to agree with that sentiment, as he called out the woke culture in the Olympics in a post on Twitter.

“I’ve always been a huge supporter of our USA Olympic teams. I was actually onstage at the Olympics in Atlanta the night before the bombing in 1996. I won’t be watching this year,” the country music legend tweeted, along with the hashtag #GowokeGobroke.

I’ve always been a huge supporter of our USA Olympic teams. I was actually onstage at the Olympics in Atlanta the night before the bombing in 1996. I won’t be watching this year. #GowokeGobroke

Olympics will be losing some viewers this year just like what happened with NFL, after many Americans have stopped watching since it became “woke.” Tritt’s statement made many Americans feel great, seeing a celebrity speaking out and not espousing the “approved opinions” of the left.