Betsy DeVos has done very well with her company Amway. She isn’t seeking the Education Secretary position for financial gain, in fact she doesn’t want a salary at all. 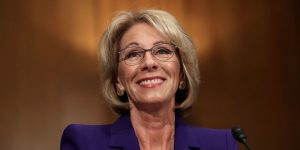 From The Truth Division:

President-Elect Donald Trump is legally required to take a minimum $1.00 salary in order to be president — which is what he will do.

Education Secretary nominee Betsy DeVos is going to do exactly the same thing.

DeVos and her family are worth approximately $5.1 billion combined, thanks to their success building the Amway company.

What do you think about DeVos and Donald Trump taking on these positions with no financial expectations?