One of the locations the shooter hit was an elementary school, where at least three children were among the wounded.

Law enforcement in the area noticed the shooter picked his targets at random. He was driving around in his car shooting at innocent people in his path.

One of the children was a six year old who had reportedly been airlifted to a hospital, and another child was shot in the leg. 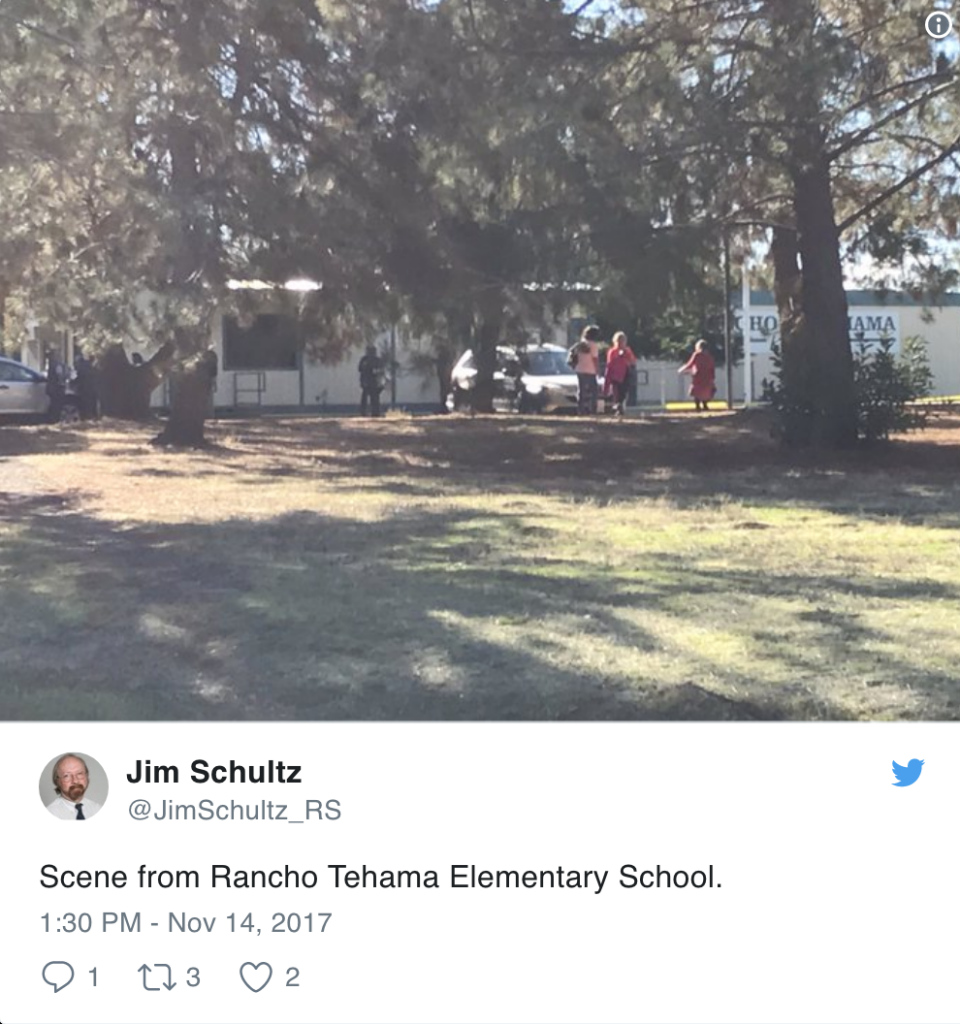 An earlier report claimed that two children were among the dead.

Those two were wounded, but did not die.

Local hospitals reported that at least seven people were admitted.

At least five people died after a gunman opened fire at an elementary school in Northern California on Tuesday morning:

Roughly 100 students attend the school, according to a local ABC affiliate, and a “number” were reportedly shot and wounded at the scene in Red Bluff, California.

The owner of Coffee Addition, a cafe near the shooting, said she heard about 100 rounds fired and multiple guns. After hearing gunfire and screams, she called 911.

Police killed the gunman who, according to a local NBC affiliate, shot and killed his neighbor before the shooting at Rancho Tehama school. His neighbor’s roommate indicated that the gunman may have stolen his truck, and that he had been shooting “hundreds of rounds,” presumably near his house.

“We made it aware that this guy has been crazy, and he’s been threatening us and everything. I just feel like there maybe should have been more effort put into stopping things like this,” neighbor Brian Flint said.

Here is part of an interview with the man who says his truck was stolen and his roommate was shot and killed by the alleged shooter who is described as a known felon in his 50’s named Kevin. #RanchoTehamashooting pic.twitter.com/ZNdwmdOwU7

The shooter’s identity is currently unclear, and as one man indicated, two gunmen might have carried out the attack.

A photo of the school emerged on social media:

Coy Ferreira told KRCR TV what he witnessed when dropping off his daughter for school around 8:00 a.m. local time:

Coy Ferreira, whose daughter is a kindergarten student, was dropping his daughter off for class just before 8 a.m. when he heard what sounded like a firecracker. A school secretary ran out and yelled for the kids to get in the classrooms because someone was shooting at the school.

Ferreira said he ran into a classroom with 14 students. He said the series of shots came through the classroom windows, hitting one student. Ferreria said a young boy was shot in the foot and the chest. When he spoke to us, he said the child was alert and talking. He said another student in an adjacent classroom was shot under the arm. That child was also conscious.

Ferreira said there were two gunmen. He saw one of them, a man in his 30’s-40’s dressed in green camo running away from the school after the shooting.

More than 100 law enforcement officers began investigating the case, with at least seven crime scenes in and around the school.

This is a breaking news story and will be updated with additional information as it becomes available.