When I was a kid, we had this camping trailer that for a good chunk of the summer, we would use for our vacations.

The other period of time it would be parked in the backyard, and sometimes you would go a good long time before anyone used it. However, when we weren’t using it every couple of weeks my parents and I would go through the thing, spend about fifteen minutes doing a light cleaning and check if there was anything out of the ordinary.

The reason why? When my grandfather was camping when he was still alive, he once took a camper out without checking it and found a beehive stuck in the camper somehow and got stung all to hell.

Some jobs have more hazards than others. Police officers and firefighters are faced with emergency situations nearly every day, roofers have to risk their lives on a daily basis by getting on top of buildings and houses to get the job done, and truck drivers have to commute across country, sitting behind the wheel for countless hours while being put in harms way on the not so safe roads.

These are just some of the many jobs that involve more danger than say, the nine to five in an office cubicle. 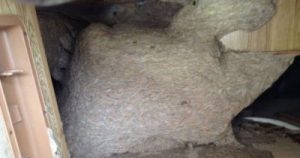 When Moncks Corner resident, Robert McDougal had to move a camper in his storage yard, he didn’t think much about it considering he was the owner of Hurry Up Towing and made a living off of moving and towing large pieces of equipment. But, as soon as he used a forklift to raise the camper, he realized that his life was at risk. He knew that he had to stay still for at least twenty minutes when help was due to arrive.

Beneath the camper, McDougal saw a yellow jacket nest that was 10 feet long and 7 feet wide, and 2 feet high, far larger than any nest he had seen before. Luckily, Eric “Critter” McCool from McCool’s Wildlife Control and Bee Extractions showed up to the scene and was prepared to take on the massive nest of what he estimated had 350,000 wasps or yellow jackets.

Thankfully, McDougal had been educated on yellow jackets and knew that they didn’t lose their stingers, which meant that they could sting you over and over again. Having that much venom at one time could be fatal, so he stood still and patiently waited for McCool.

McCool, who seems to have been born to do the job, went into the nest and singlehandedly removed 37 queens.

“I was virtually inside the nest, ” said McCool. “It was very hot and stuffy. It was like crawling through a bunch of cushions and you could feel them buzzing against the bee suit.”

McCool, who has been at the job for the past two decades, admits that he has been stung more than 6,000 times and he is quite used to it by now. While his colleagues in the bee removal industry recommended that he use pesticides to kill off bees in situations like this, McCool disagrees and instead uses a bee vacuum and grabbing bags.