A dutiful dad discovered something horrifying after her teenage daughter complained about the bathtub that is taking a long time to drain.

Shawn Weiss, TikToker (@shawnweiss8) and father of a teenage girl, posted a video of himself reaching through bath water to dig into the drain. He begins to pull the questionable clog, and pulls and pulls….the viral video gained over two million views and nearly 7,000 comments when he posted the icky footage online.

“I can’t believe she let it get this bad!!!,” Weiss captioned the video as he pulls a giant wad of hair out of the drain and wraps it around his bare hands. 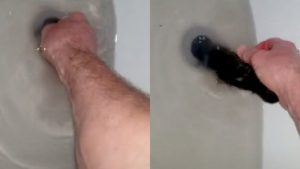 To give viewers an idea of the size of the hairball, Shawn grabs ahold of something that is clogging the tub’s drain and then stretched it along the edge of the bathtub.

He slowly pulls at it and pulls at it until it becomes clear that the blockage was from his daughter’s hair! After a minute, Shawn pulls a long clump of hair out of the drain and shows it to the camera. That thing must have been building up mass month after month for a long time for it to get as big as it was in the viral video.

The video garnered disgusted reactions from thousands of fellow TikTokers who didn’t hesitate to comment on the post.

“He pulled the whole ‘Grudge’ girl outta the drain,” one user joked.

“The girl from ‘The Ring’ down there,” another user wrote.

“Cousin It, is that you?” laughed another user.

“Either chop your hand off or dip it in a tub of bleach,” wrote one user, disgusted by Shawn’s lack of gloves.

To this, Shawn replied, “Oh no, it stunk so bad that I had to soak my hand in a half gallon can of tomato juice… OVERNIGHT!”

“I know it’s just hair but…🤮 Did she get sucked down the drain?” one nauseous user commented.

“No, just most of her!” Shawn replied.

“I remember being a teen and telling my dad the shower wasn’t draining and he did this. He got a drain filter the next day,” one user wrote.