A drug dealer man is charged with homicide by child abuse after his 1-year-old daughter died in the back of a burning car that he abandoned during a vehicle chase on Interstate 85.

Norman has since learned his fate after his heinous actions led to the innocent little girl losing her life. 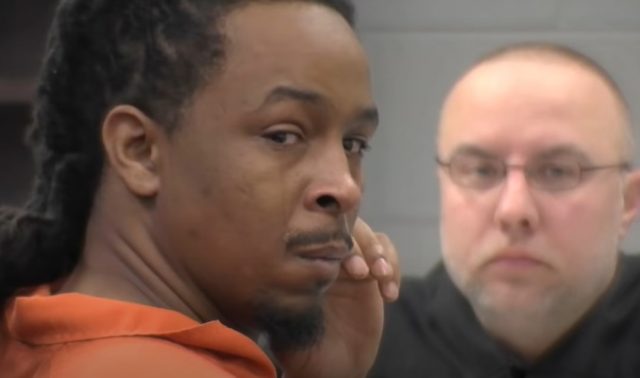 According to the Daily Mail reports:

Norman has rightfully been dubbed a deadbeat drug dealer dad after leaving his toddler daughter to die in a burning car. Officers reportedly tried to stop Norman from speeding, but rather than comply, he decided to try to flee. A police chase ensued, and at some point, Norman’s car caught fire while his daughter Xena was still inside.

The troopers attempted to stop Norman’s 2015 Hyundai Sonata on Highway 14 near Johns Road for speeding on April 12, 2019. Norman drove over the median of Highway 14 and traveled northbound on I-85.

The car was fully engulfed in flames before troopers forced Norman to the right lane of the road near the 60-mile marker. Norman jumped from the burning car and left his daughter in her car seat.

The firefighters managed to extinguish the fire. That’s when the body of one-year-old Xena Norman was found in the back seat. Although Imhotep Norman managed to flee into the woods, he was arrested hours later and argued his innocence in the girl’s tragic death.

A bag was thrown from the moving car as the pursuit was coming to a close. The bag was later recovered and tested positive for illegal narcotics, According to authorities.

Norman was caught several hours later, telling police he assumed cops were going to rescue Xena after he fled.

Although it’s unclear what triggered the blaze, what was clear from the video footage was that Norman kept driving instead of stopping to seek help before finally abandoning Xena, leaving her to perish in the flames while he saved himself. As flames could be seen billowing from the car as it pulled over, Norman jumped from the burning vehicle. As he ran away, a trooper saw him toss a backpack that held illegal drugs.

For his crimes, Imhotep Norman was sentenced to 28 years in prison. He will have to serve 85 percent of his sentence before he’s eligible for release, the solicitor’s office said. Considering the fact that his actions robbed Xena of her entire life, less than three decades in jail — when she likely had 7 decades or more of life left to live — seems rather paltry.

However, the deadbeat dad did provide an important lesson about drug dealers. Namely, they don’t love anyone or anything as much as themselves, their drugs, and avoiding the consequences of their addiction. At a minimum, Norman’s drug involvement and saving himself were at the forefront of his mind when his daughter was not.

“He loved her so much,” Norman’s mother said through tears, defending her son as she spoke on his behalf at a bond hearing. Sadly, as we’ve seen, he didn’t love her enough to simply accept accountability for the crimes that he had already committed. Instead, he tried to dodge his consequences, even if it meant leaving his young daughter behind to face the ramifications of his actions as he ran from them.

Remember Xena Norman’s tragic death the next time someone says drug abuse is a victimless crime. It most certainly is not, and it’s often the innocent who become caught in the crosshairs created by the addict. Xena would be alive if her father had just pulled over and accepted the punishment he had coming to him as a drug dealer, but instead, he sacrificed an innocent child in an attempt to save himself. Sadly, that’s what addicts do, so don’t let anyone tell you any different.