Human traffickers are indeed a plague on humanity. And even in this modern era, they flourished and hid in its dark, seedy underbelly, looking for the next victim.

So no matter how comfortable and safe we might feel, there is always the chance that one of us could be their next target.

One TikToke user warned us through a series of TikTok videos that have exposed a common tactic used by criminals to target their next victim.

Later, TikTok user Achunkyguy explained what, in their opinion, this means. He shared his take that this is a tactic that kidnappers allegedly use to distract their targets.

Reece, aka Achunkyguy, confirmed that he doesn’t have “cold hard evidence” that this technique is used by kidnappers. “However from the response on some of my videos it’s safe to say it’s a widely known thing amongst women,” he shared his opinion. 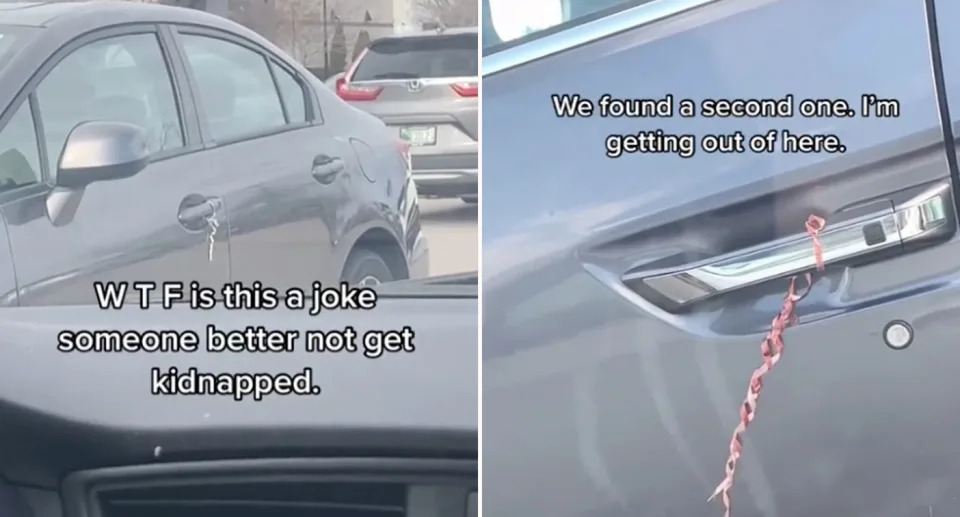 Reece claimed that while “it can come in all different forms”, wire is commonly used to wrap around door handles as it takes longer to remove and distract the target for a longer period of time.

“Tactics like this are being used in the US prominently but in the UK as well, where people will put stuff on your car to distract you for that split second, so they can grab you before you get into your car,” Reece claimed.

The TikTok user also said other items can be used such as things slipped under windscreen wipers and items placed on the bonnet.

Earlier this year a woman found herself in a similar situation after being followed by a man. She returned to her car to find a water bottle placed on the bonnet.

From inside her car, Haley, who uses the handle @haleywestco, shared the incident that left her “shaking”.

She explained to her followers that she noticed the man staring at her as she left the supermarket in Ohio and claimed he then tried to lure her to her own car, pretending it was his.

AWM noted in their report that Americans must be vigilant and look out for this warning sign:

After the first video from Ice.Lemon.Water went viral, the TikTok user returned to respond to Reece’s comment and to claim that the tie they found in the parking lot appeared to be the type of ribbon used to tie balloons.

Nevertheless, Reece wants Americans to look out for this warning sign. If you see a ribbon or wire on your car’s door handle, you should beware and not approach the car alone.

“Tactics like this are being used in the U.S. prominently,” Reece claimed in a follow-up video. “People put stuff on your car to distract you for that split second so they can grab you before you get to your car.”