A FISA court order dated January 7, that was unsealed on Thursday, reveals that the Justice Department is scrambling to quarantine every single thing they gathered as part of their tainted Carter Page investigation. They have an obligation to round up all their bogus evidence and lock it away where deep state moles can’t burrow any further into it.

Because the information was obtained illegally, it has to be stricken from the record, anywhere and everywhere it was used. The legal world calls it “the fruit of the poisonous tree.” That will have an impact on every case that spun off from Robert Mueller’s inquisition.

Fed up with being kept in the dark yet again, after being illegally misled and intentionally lied to by the people in charge of enforcing the law, the Foreign Intelligence Surveillance Court made it clear their patience is wearing thin. They set a firm deadline and told the DOJ to get with the program and show some results, pronto. “By January 28, 2020, the government shall make a written submission regarding the FBI’s handling of information obtained pursuant to the above-captioned dockets.”

They specifically demand to know exactly how the material is secured, who can access it, and why they need to access it. They also want to know what steps have been taken to round up any evidence that already escaped into the wild. “a detailed description of the steps taken or to be taken to restrict access to such information in any other form, including any information that may have been disclosed or disseminated to DOJ prosecutors or other persons outside of the FBI.”

Thanks to the Inspector General for the Department of Justice, The FISA Court learned of “material misstatements and omissions” in the wiretap applications filed in the Carter Page case. The information gathered illegally formed the core of Robert Mueller’s witch-hunt into President Donald Trump’s non-existent “collusion” with Russia. 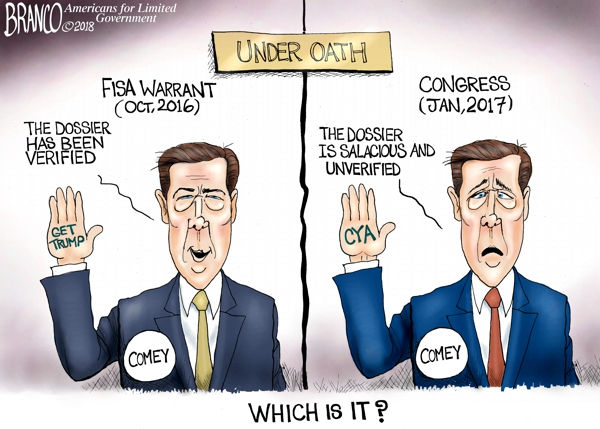 The FISA court is furious that they were so blatantly misled in such an important and sensitive investigation. They came down like a ton of bricks on the DOJ and ordered a Superfund scale cleanup of the illegally obtained toxic “evidence.” The DOJ admits that they lied to the court on the last two renewal applications, “if not earlier.” The IG determined, there wasn’t any real evidence “to establish probable cause to believe that Page was acting as an agent of a foreign power.”

According to the IG report, the Federal Bureau of Instigation is going to “sequester all collection the FBI acquired” as a result of all four applications, not just the two where they admit lying to the court. That means every shred of evidence gathered in the entire clandestine operation against Page will be rounded up and locked away.

The order notes that the FBI still hadn’t told them how they planned to accomplish the task. “The government has not described what steps are involved in such sequestration or when it will be completed.” They testily remind the DOJ that they promised an update when everything was rounded up, and it’s overdue. “It has, however, undertaken to ‘provide an update to the Court when the FBI completes the sequestration.'” There hasn’t been one.

They were also supposed to “update the Court on the disposition of the sequestered collection at the conclusion of related investigations and any litigation.” They haven’t done that either. “To date, no such update has been received,” the court writes.

The court then quotes the law that requires the government to keep things gathered in these investigations tightly under wraps, where only the people who really need to see the material can get at it. “It requires minimization procedures ‘that are reasonably designed… to minimize the acquisition and retention, and prohibit the dissemination, of nonpublicly available information.”

They also remind the DOJ that it’s a “crime” to “intentionally… disclose or use information obtained under color of law by electronic surveillance, knowing or having reason to know that the information was obtained through electronic surveillance not authorized” by FISA. The very next sentence is the only thing “redacted” on the entire document. The DOJ doesn’t want the public to know what’s under that magic marker, but based on it’s positioning, it’s easy to speculate that the FISA court made some note to the effect that the DOJ did commit such a crime.

They note that the DOJ seems to be dragging their feet and blaming it on a need to “further review” the OIG report and look at “related investigations and any litigation” to see if anything prevents them from complying. The court wants to know all the minute details of what needs to be reviewed and why the illegally obtained evidence has any legitimate use in any other case.

It’s nice to see someone finally watching the watchers and it will be interesting to see if any high officials will try to keep playing hide the ball. The FISA court is so fed up at this point that anything other than total compliance is likely to result in a contempt of court charge and maybe even some jail time.