Liberals are hypocrites who never see any fault in Obama’s actions. All of the outrage over which Muslim countries President Trump is banning for a few months, they should know who created the list of countries… Your dear former president Obama! 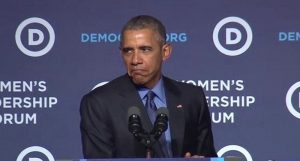 It’s been about 48 hours since President Trump signed his executive order designed to secure the United States from infiltration of terrorists. One component is the 90-day ban on travel from seven countries; anyone traveling or immigrating from Iraq, Syria, Iran, Libya, Somalia, Sudan and Yemen will be barred from entering the United States.

The left is decrying this list of Muslim-majority countries as a “Muslim ban.” But there’s a key fact that is being omitted in the media’s coverage of this and the protests: it was President Obama, not President Trump, who first created this list.

If you take a look at the full text of Trump’s executive order, you’ll notice that none of those seven countries are actually mentioned in it.

Here’s what the relevant portion of the EO says:

This is a reference to an overwhelmingly bipartisan law, passed in 2015, called the Visa Waiver Program Improvement and Terrorist Travel Prevention Act, which required additional security scrutiny on anyone traveling from Syria, Iraq, Iran, and Sudan and any other country designated by the Department of Homeland Security (DHS) to be a source of legitimate terrorism concerns.

Obama signed it into law in December 2015. In February 2016, Obama’s DHS added Yemen, Somalia, and Libya to its list of jeopardized countries, rounding out the seven. In its press release back then:

This is the latest step in a series of actions over the past 15 months to strengthen the security of the Visa Waiver Program and ensure the Program’s requirements are commensurate with the growing threat from foreign terrorist fighters, many of whom are nationals of Visa Waiver Program countries.

Be sure to share this story so everyone can know the facts!