Quid Pro Joe Biden is starting to feel a little lonely in his living room. During the livestream from his home on Friday night, he nearly gave his private phone number on live TV to those grieving over lost loved ones. It’s bothering him too and he wants to share the grief. “I’m happy to try to talk to you,” he begged.

The quarantine lockdown seems to be taking a toll on Joe Biden and he’s feeling rather lonely. He’s so anxious to find someone to talk to that he invited his moderate liberal supporters to visit with him virtually. Biden hosted a remote town hall, speaking from his living room in Wilmington, Delaware.

The highlight of the broadcast came when “Biden appeared to almost offer his cell phone number,” CNN reports. He “stopped himself and instead urged Americans who have lost loved ones to get in touch with his campaign so that he could talk with them.”

You can’t blame Biden for being sympathetic, he does have valid reasons for sharing their grief. His first wife and young daughter were killed in a car crash and his son Beau Biden succumbed to brain cancer. What’s noteworthy is the fact that his grief could affect his judgment enough to forget his surroundings. That’s not a good sign in someone who could be in charge of a major crisis. “Not that I’m an expert, but just having been there. I’m so sorry for you.” 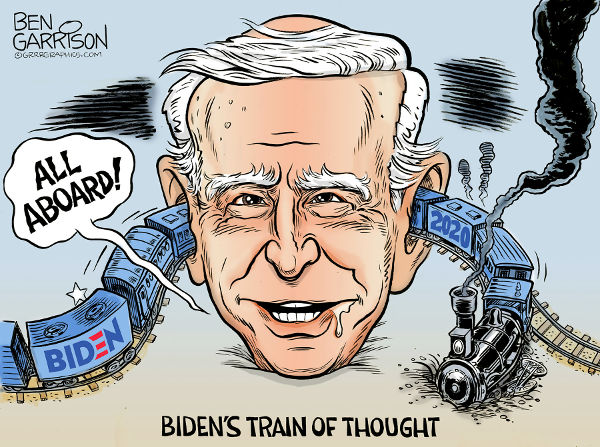 Joe thinks he could do better

If Biden was in office today, every single American would be under forced lockdown, whether the virus is active in their vicinity or not. Biden says you can’t have “people walking around looking like they’re pretty healthy.” Ignoring the fact that everyone in affected areas are already quarantined, Biden insists “you don’t know who doesn’t have the virus.” He’s not happy that Congress only threw $2 trillion at the crisis. He doesn’t only want the tests to be free he wants to “cover all health care costs related to the virus.”

His first instinct is to freeze like a deer in headlights. He demands a three-month freeze on rent payments. “Freeze it and forgive it so that you’re able to stay in that place.” He wasn’t all that firm in his stance. As soon as his plan was questioned, he waffled. Well, maybe not all rents. “the freeze might not to apply to those whose income up to $75,000 is replaced by unemployment insurance.”

Biden insists he’s in the loop. All the Democrat governors are calling him daily to complain about the lack of federal handouts. Instead of doing their parts as state administrators, they expect Uncle Sam to step in like Superman and save the day.

His grandkids are socially distanced from his hairy legs for the duration of the crisis, but he still “stays in touch.” His descendants live nearby, so, “we sit on our back porch and they sit out on the lawn with two chairs. They talk through everything that’s happened during their day now that they are home from school, who’s driving who crazy.”

One thing’s for sure, Joe Biden’s got soul. He looks across America and sees the soul in others too. “We are seeing the soul of America now. Take a look at what is happening. Everywhere you look, you see people reaching out to help people.” That is one thing all Americans can agree on. “This is an incredible nation. The American people are generous, decent, good, fair, bright, and it makes you so proud to be an American.”