“I believe these license plates could be very popular with Oklahomans,” insists Senator Marty Quinn, one of the sponsors. “Our president has been very supportive of our veterans, and these plates are a great way to give back to some very deserving Oklahoma veteran groups.”

Co-sponsor Nathan Dahm agrees. “With the introduction of these specialty license plates, we are providing Oklahomans with the option to show their support for America. The added benefit of these special license plates is the proceeds from their sale will support two veteran groups here in Oklahoma that President Trump has donated to in the past.”

Specialty license plates in the state run an extra $35 which means there is an opportunity not only to boost tax revenue, but help veterans with the proceeds of Oklahoma’s patriotism.

Not a single dime will go to President Trump or his campaign but a $20 portion of each plate’s proceeds will be donated to local veterans groups. Both the Warriors for Freedom Foundation and the Folds of Honor Foundation will get $10 each.

The state legislature will consider the proposal in the session starting February 3. If passed, Oklahoma would be the first state to roll them out. Perhaps, the idea will catch on in other states. 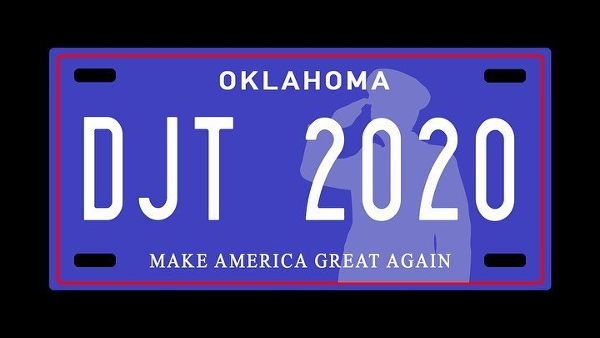 One motorist, Gary Pierce, commented “I don’t think it’s such a bad deal, especially if the money’s going to the veterans.”

Liberal snowflakes are sure to get testy about the slogans but that’s one of the great things about America, freedom of speech. The way Dahm puts it, “the beauty of the plate is that it’s a specialty. If you don’t want it, you don’t have to buy it.”

“There’s people that are upset with just the president in general, so I understand that people have those feelings, potentially negative feelings against the president, but the great thing is, here in America, you have freedom of speech.”

According to the bill’s language, “the plates shall be designed and issued to anyone wishing to demonstrate support for Trump’s proclamations. The plates would be designed in consultation with the corporation or entity designated by Trump, and the state’s tax commission would be authorized to enter a licensing agreement if any licensing fees are required.”