An undercover video has been released of terrorist plans for inauguration day. This is a “protest” against Donald Trump but they crossed the line of protester into a terrorist. Watch below… 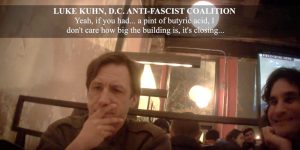 In this video, Project Veritas investigators uncover a group known as the DC Anti-fascist Coalition plotting to disrupt President-Elect Donald Trump’s inauguration by deploying butyric acid at the National Press Club during the Deploraball event scheduled for January 19th.

The meeting, captured on hidden camera, was held at Comet Ping Pong, a DC pizza restaurant that is better known as the location of the Pizzagate controversy. The coalition members discuss the steps they would need to take to halt the Deploraball event. Project Veritas notified the FBI, Secret Service and DC Metro Police of the content of this video prior to its release.

This is horrible! These people need to be taken into custody for being terrorists! What do you think?