Multiple hurricanes have devastated the Island of Puerto Rico and the mayor of San Juan, Carmen Yulin Cruz, made a huge mistake by suggesting President Trump isn’t going above and beyond to assist in relief efforts.

With the entire Island of Puerto Rico in ruin, government officials are scrambling to find a way to move forward with relief efforts but being such a small and dependent country, assistance is necessary. Only days ago the governor and mayor of Puerto Rico praised the US government for their quick and organized actions, however the mayor flip flopped as liberals do and is now blaming President Trump for his lack of support. Carmen Yulin Cruz, the mayor of San Juan, Puerto Rico’s capital, appeared on MSNBC and spoke with Joy Reid regarding the feud she has going on with President Trump which includes Trumps Twitter response to her calls for help.

Trump has 10,000 federal aid workers currently in Puerto Rico to help in anyway the government needs them to, so Cruz really has no room to accuse the President of anything while claiming to simply be asking for help.

We ARE helping in a significant manner, and this liberal mayor needs to step back from this unnecessary lime light and do her job.

“The Mayor of San Juan, who was very complimentary only a few days ago, has now been told by the Democrats that you must be nasty to Trump.”

“Such poor leadership ability by the Mayor of San Juan, and others in Puerto Rico, who are not able to get their workers to help.” 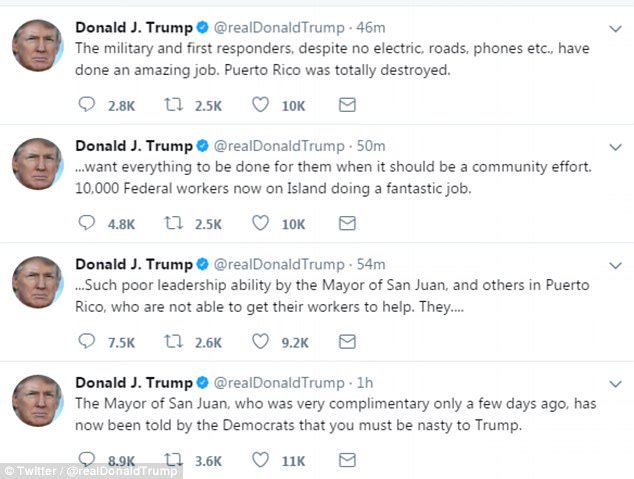 Cruz responded to Trump’s comments this morning telling Joy Reid on MSNBC: “Actually, I was asking for help. I wasn’t saying anything nasty about the president, but don’t take my word for it.”

Don’t worry, we won’t take your word for anything.