An officer saved by passing motorist who was attacked by an armed man in a lonely interstate highway in the desert West of Phoenix.

Arizona Department of Public Safety trooper, Edward Andersson, a 27-year old veteran, was on his was responding to an emergency call at about 4 am on rollover accident in a remote interstate highway at interstate 10 about 40 miles west of Phoenix. 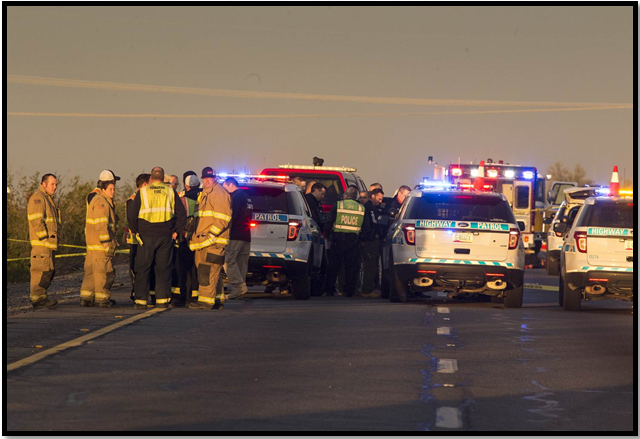 The state trooper stopped, investigated the scene and set out road flares to block off the scene. He then approached the vehicle to help the injured man and woman.

The suspect identified as Leonard Pennelas-Escobar, 37-years old, of Mexico. The Hispanic man began exclaiming in Spanish which Andersson could not understand. That is when the suspect shot the officer with a 9mm pistol hitting him on his upper right shoulder and exited through his right torso.

The two men then began engaging a physical fight and the suspect bashing the troopers head into the pavement.

Then a passing motorist who was travelling with his fiancée towards California spotted the fight. The motorist stopped as he saw the suspect straddling and striking big blows to the officer.

The “good samaritan” who refused to be identified, took a hand gun from his car and ordered the Hispanic man to stop. However, Pennelas-Escobar refused and responded with profanity. The motorist began circling the grappling pair to find the clean shot. He fired at the suspect incapacitating him temporarily. Despite the gunshot wounds, Pennelas-Escobar stood up and attempted to assault Andersson again. That is when the motorist shot the suspect dead.

Another motorist also stopped at the scene and ran to the trooper’s vehicle and grabbed the radio and asking for help.

The second man identified as, Brian Schober, told a dispatcher: “Hello, officer down, officer down outside Tonopah. Come in, please. This is a civilian. He’s shot on I-10 on the eastbound lane — sorry, westbound lane.”

The dispatcher began coordinating an emergency response, keeping Schober on the radio before asking for a status report.

Col. Frank Milstead, director of the Arizona Department of Public Safety,said “We don’t know what the story is, and we’ll figure that out as time goes on,” he said. But one thing was clear, he said:

“In our worst hour, we may need your help, and this was today. … Thank you. Thank you for the support,” he added.