A sheriff in Ohio issued a defiant warning to protesters on Wednesday after he said cities around the country had descended into “lawlessness” amid recent protests over the police treatment of Black Americans.

Butler County Sheriff Richard Jones issues a stern warning to everyone about cop haters and abusers that he wouldn’t tolerate violence against the police, he told anyone considering it exactly what his department would do about it.

Sheriff Jones of Butler County, Ohio became increasingly fed-up with violence against law enforcement being on the rise around the country.

So he decided to use the Butler County Sheriff’s Office Facebook page to send a bold message to everyone, to those contemplating violence against cops, and he didn’t hold back.

The post cited instances of objects, including rocks and water, thrown at officers responding to protests that have in some cases devolved into violence.

“IF YOU THINK ABOUT COMING TO BUTLER COUNTY TO ABUSE POLICE THINK AGAIN.” Calling out the “lawlessness” that’s been seen across our country “directed towards police,” the post continued, listing off examples of what law enforcement has been subjected to across our great nation.

“The Sheriff has seen water dumped on police in New York, bricks and frozen water bottles were thrown at police as well as officers blinded by lasers in Portland, Oregon,” the post read. “In addition, Police have been shot at in Chicago and all across the country,” the department added before quoting the sheriff and his message to anyone thinking about doing something similar.

“I won’t tolerate it, period,” Sheriff Richard Jones declared. “You shoot at the police expect us to shoot back. I will not allow my deputies or any law enforcement officer in Butler County to take the abuse I have seen over the past several months. If you come to this county expecting a free pass to harm one of my men or women in uniform keep in mind, nothing in life is free.” 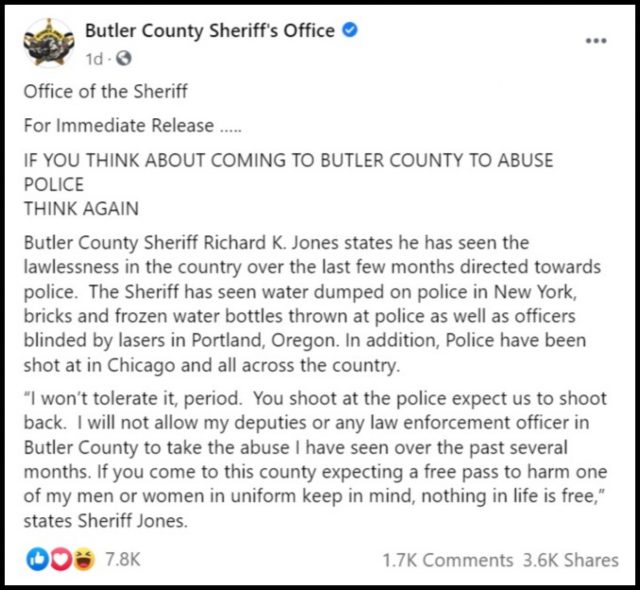 One commenter wrote as many others chimed in to thank him for caring about his citizens and officers, “Every county in the United States needs more sheriffs like this.”

Although the news tends to be inundated with anti-police sentiments, those who read Sheriff Jones’ warning on Facebook appeared to solidly stand behind his statement. 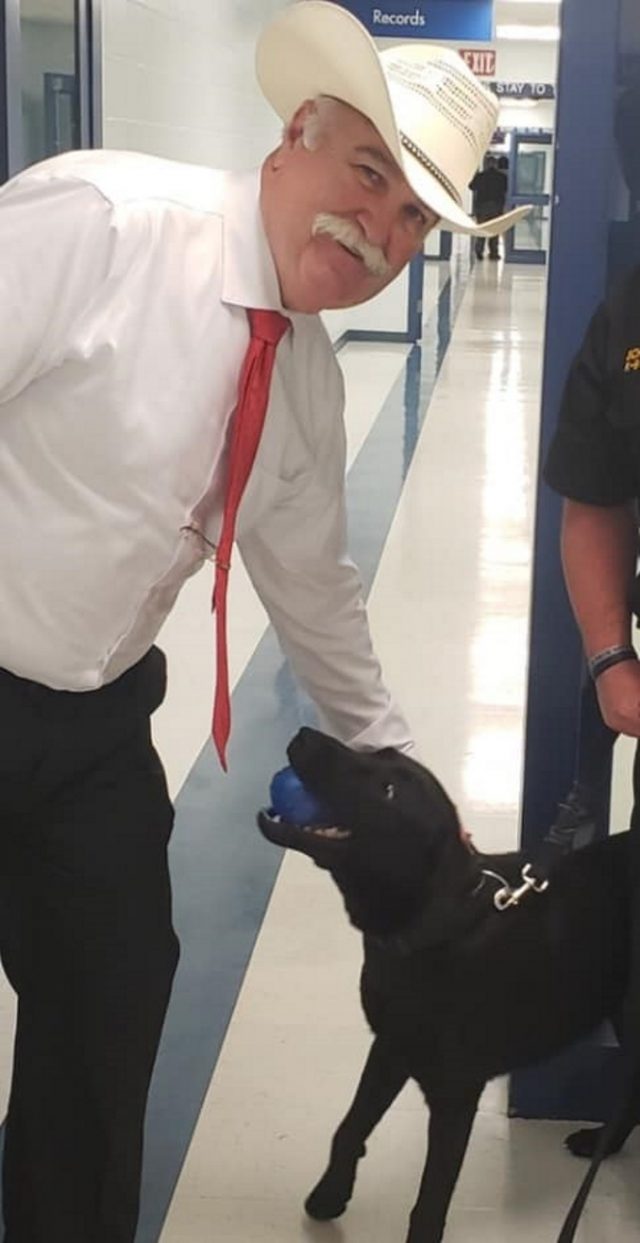 Here are some of the comments people said online:

“It’s about time someone is not afraid to do their job and hold lawbreakers accountable for their actions.”

“Backbone !!! Hooray Sheriff, hold strong and keep the integrity of our law enforcement community. Godspeed to them all.”

“I live in Butler County. [Sheriff] Jones is for real. He is a good man. DO NOT mess with him or his department,”

“Always like Sheriff Jones when we lived in the area, my respect for him has actually increased immensely. This country needs MORE SHERIFFS just like him.”

This isn’t the first time Sheriff Richard Jones has openly spoken his mind, and he doesn’t seem to care about what controversy his opinions might spark.

Proving this to be true, Jones openly disagreed with a mask-wearing mandate from Governor Mike DeWine during the fight against the coronavirus. Saying he was “not the mask police,” Jones told the public that he wouldn’t help enforce the mandate because it was not his responsibility or his job. Instead, he felt “people should be able to make that choice themselves,” he said at the time.

Regardless of whether or not you agree with his sentiments, it is nice to see a sheriff who isn’t afraid to speak up or let others know exactly where he stands and what his community can expect from him and his department. Like most sheriffs across the country, Jones holds an elected position. Because he’s open and honest about what he will and won’t do as sheriff, voters can decide whether he continues in his role. Since he became Chief of the Butler County Sheriff’s Office in 1993, it appears he has his community’s support.