Trump is making good on the promises he made during his campaign trail. Today he signed 3 executive orders; One that ends the TPP trade deal, one freezing Federal Government hiring (except for military) and one ending the funding of international abortion clinics. 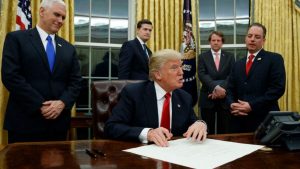 He also signed two other orders — one placing a hiring freeze on some federal workers and the other reinstating a ban on funding for international groups that perform abortions.

The TPP, a giant and semi-secret 12-member free-trade agreement advocated by the Obama administration, aimed to deepen economic ties between the U.S. and 11 other Pacific Rim nations, cut taxes and foster trade to boost economic growth in the process.

“We’ve been talking about this for a long time,” Trump said, as he signed the document. He called the order to pull out of TPP a “great thing for the American worker.”

Trump argued on the campaign trail that the TPP is harmful to U.S. workers and robs the manufacturing sector.

Supporters of TTP said it would have been a boon for all 12 nations involved and would unlock business opportunities on a global scale. Opponents argued, among other things, it would encourage exporting U.S. jobs to low-wage nations.

Trade has been the rare issue where Trump and labor unions have found common ground.

“With this decision, the president has taken the first step toward fixing 30 years of bad trade policies that have cost working Americans millions of good paying jobs,” Teamsters Union President James Hoffa said in a written statement.

President Trump is working hard to bring jobs back to America.

How do you feel about the TPP trade deal? Happy to see it gone?