Donald Trump is about to be the first president in a lot of young American’s lives to be drug AND alcohol free! His brother’s death and being a man driven for success were huge factors in his decision to stay away from those things. 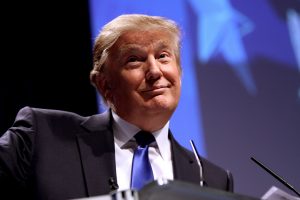 If this had been a leftist, this issue would have been front and center in the media every single day. One of the things that President-elect Trump does not get enough credit for is the fact that he has never done drugs, drank or smoked cigarettes. For anyone born after 1993, this will be the first president to be free of all those things. Trump credits his brother dying at age 43 from alcoholism as being his motivator for living a clean lifestyle. He taught those same values to his children.

Barack Obama has admitted to doing marijuana and cocaine. He also drinks and smokes. And in fact, I would not be surprised with his liberal values if Obama doesn’t still imbibe in drugs. We know his oldest daughter does. George W. Bush had a problem with alcohol when he was young and admitted to marijuana. He would also not deny he did cocaine. Now, we come to Clinton, who pretty much lied about everything. He did admit to smoking pot, but not inhaling – right, we all had a good laugh over that one. He drinks and he denied using cocaine… but there has been a ton of evidence out there that he did do cocaine frequently. Drug use is nothing to be proud of… but at least Bush stayed away from in it as he got older. The other two, not so much.

Trump has long claimed that he has never once smoked cigarettes, touched alcohol or used drugs, which would distinguish him from the last three men to occupy the White House, all of whom either admitted to drug use or refused to deny it. While younger voters are more likely to support legalizing marijuana, for those who were born after January 20, 1993, Trump will likely be the first president in their lifetime to have never used illegal drugs.

“If you don’t drink and you don’t do drugs, your children … are going to have a tremendously enhanced chance of really being successful and having a good life,” Trump said at a 2015 town hall in New Hampshire — a state that has been devastated in recent years by opioid overdoses.

Here’s to a presidency that is uninhibited by drugs and alcohol. Here’s to the success of America!