A three-way partnership between farmers, food banks and the Agriculture Department is “a win for food banks and a win for farmers.” Instead of reinventing the wheel, they’re streamlining an existing voucher program that lets farmers and food banks “work directly with one another.” That means milk, meat and produce can move straight from farmers to the food bank. There may even be enough left over for some “international humanitarian aid.”

Streamlined voucher plan a win-win solution for all

When the American Farm Bureau Federation got together with Feeding America to discuss ways to get milk, meat, and produce quickly into the hands of distressed Americans, there was an obvious solution right in front of them. “A voucher system coupled with some necessary regulatory tweaks that keep food safety paramount.”

It makes so much sense that the Secretary of Agriculture instantly gave the plan his enthusiastic approval. Sonny Purdue got out his scissors and cut through the tangle of red tape, so that farmers no longer have to worry about food going bad before it can reach the market. “This is an opportunity for USDA to act quickly to produce a win for food banks and a win for farmers,” the groups wrote to thank Purdue on Wednesday.

The plan will “allow farmers and food banks to work directly with one another instead of relying upon third parties, which sometimes delays the farm-to-food bank timeline.” The USDA has an initial emergency budget of $15.5 billion to fund the effort. “It’s a chance for government to serve as a facilitator while clearing bureaucracy and red tape, which fits well within the philosophy you have followed in your leadership of the department.”

The best part is the mechanisms are already in place.

The industry groups are as thrilled with the voucher plan as the USDA. “USDA responded very enthusiastically to the proposal. They too see this as a way to help both families in need of food and farmers who are anxious to provide it,” AFBF President Zippy Duvall relates. He explains one of the best features is that the program “would simply be an expansion of existing partnerships” that the farmers and ranchers already have with their local food banks.

The Trump Administration also agreed to buy the milk and meat directly from the farmers “to help them weather the impact of the coronavirus outbreak.” According to Secretary Purdue, “We want to purchase as much of this milk, or other protein products, hams and pork products, and move them into where they can be utilized in our food banks, or possibly even into international humanitarian aid.”

Last week, Purdue assured farmers that the government would be “using all financial resources we have been given to develop a program that will include direct payments to farmers & ranchers hurt by COVID-19 & other procurement methods to help solidify the supply chain from producers to consumers.” 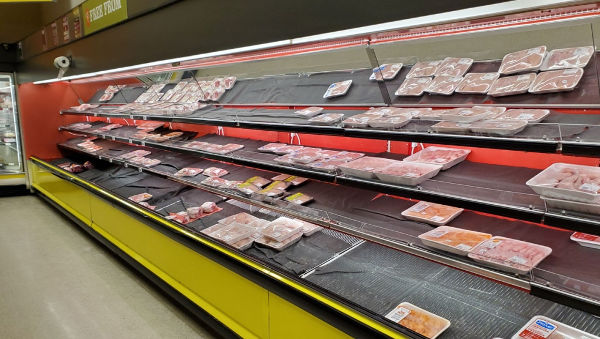 To help get the product out of the fields and into the hands of consumers, in addition to the voucher program, the Department of Homeland Security also announced an easing of restrictions on legal migrant workers. Farmers are allowed to hire anyone with an H-2A visa without bureaucratic interference.

Despite all the gloom and doom headlines in the mainstream network media, we’re not going to starve. According to USDA reports, “in both commercial and public storage, the US has stockpiled 925 million pounds of frozen chicken, 491 million pounds of frozen beef and nearly 662 million pounds of frozen pork.” The biggest issue is that the live animals are backing up in the fields. Pork, chicken and beef producers all have the same problem that one major pork producer voiced. “We are calling for massive USDA pork purchases as one solution to this. If the USDA came in and purchased, you know, a large amount of pork, that would go a long way towards relieving this capacity issue.” The USDA listened.

Leave a Reply to The Grand Reopening: One Careful Step At A Time Cancel Reply