In this time of serious emergency, our nation simply cannot allow our past charity to turn into an anchor dragging our nation down. We can’t be throwing rocks into our lifeboat if we expect to bail out our economy. President Trump made a highly controversial crisis mode decision on Tuesday, to halt our voluntary donations to the World Health Organization. The mainstream media is attempting to make it into a partisan issue, but history will show the president’s choice was correct.

We can’t allow the media to call the shots

The network media is furious that the president would dare to cut funding to the World Health Organization in the middle of a pandemic. The truth is that President Donald Trump is making the right decision. Anything other than essential services needs to be closed and spending must be halted now. The cuts must be drastic because every cent we allow to be spent now becomes rocks in our lifeboat.

The WHO has long been criticized as a tangle of red tape, but now they seem to be bending over backwards to cover up for China. As Secretary of State Mike Pompeo notes, the WHO “declined to call this a pandemic for an awfully long time because frankly the Chinese Communist Party didn’t want that to happen.”

President Trump accused the WHO of “failing to investigate credible reports from sources in China’s Wuhan province.” Those reports indicated that China was lying about how quickly the disease was spreading. “The WHO failed in this basic duty and must be held accountable.”

We pay more to the WHO than anyone, voluntarily

Each member state is required to pay dues called “assessed contributions.” Our share is $237 million. For the past two funding years, we kicked in an extra $656 million “in the form of donations.” Nobody else on the planet comes close to what we have been spending. Now that a Chinese virus, likely an escaped bioweapon, wiped out our economy, we can’t afford to make donations. Let China pick up the tab.

Since we obviously aren’t getting what we paid for, our purely voluntary donations to the World Health Organization have become a life threatening hemorrhage of cash. As a nation, we can’t allow our throat to be cut by bureaucratic luxuries.

The Federal Reserve exists for one fundamental purpose, to instantly create money out of thin air. That’s how they fund “bailouts.” From the automakers to the savings and loans to the banking system, the fed was around when we needed them. Now we’re going to need the Federal Reserve like never before in history, to bail out the entire United States economy from the shock of the coronavirus pandemic. 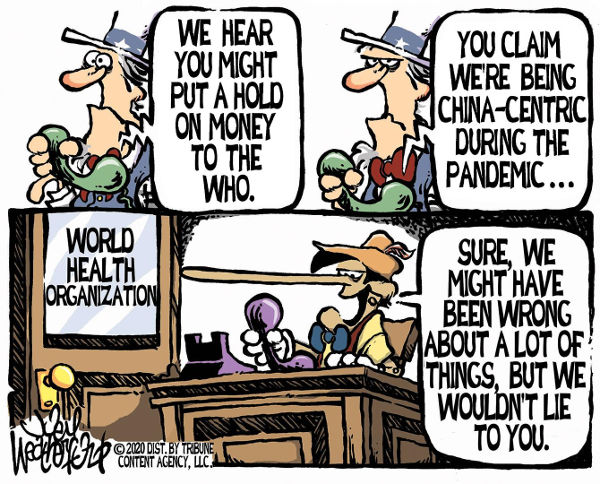 Every bailout comes with a price tag

Each and every one of those bailouts comes with a price tag. It’s called “inflation.” Higher prices and money that doesn’t go as far as it used to. The bigger the bailout, the worse the inflation.

Uncle Sam is now faced with the same reality as all the industries and states who also need fed bailouts to survive. The only thing any administration can do is stop spending money. Economists stress that it is crucial to stop spending immediately.

States and localities who don’t react quickly to shut down everything but police, fire, and health might not survive in the end, as their tax base heads to better managed places. Any time a bailout is involved, spending cuts are crucial. It doesn’t work quite the same way at the federal level but any spending we allow now will be more glass shards to painfully walk across in the future.

The president should be applauded

According to lawmaker Jim Jordan, President Trump should be “applauded for withholding money from the World Health Organization, which kept the truth about China being the origin of coronavirus.” The Ohio Republican insists, “we’re not going to pay organizations to lie to us. They’ll probably do that for free.”

“China didn’t tell us what was going on. They didn’t try to stop this thing in their tracks like they should’ve. So, of course, this is the right decision, and I think so many Americans are applauding the president for this decision.”