These radical leftists and members of the mainstream media never fail to bore everyone to tears by attempting to prove their “woke” creds during holidays and other special occasions.

They always have something to say to stay relevant but in the process proving to us how deeply unhinged/wacked most of them truly are.

Just like what BLM has been doing on their Twitter feed on an American nationalist Thanksgiving holiday, these thugs Black Lives Matter couldn’t resist spewing racist nonsense.

But of course, the fact-checkers and fair play monitors studiously looked the other way.

BLM doesn’t know much of the history, Europeans committed genocide all across North America. At the time, the practice was common.

In fact, the Spaniards were just as busy devastating South America with disease and oppression while the French worked really hard to conquer Canada’s indigenous natives through addiction to alcohol.

Well, all these don’t matter to BLM, because it only gets in the way of their socialist propaganda.

It wasn’t nice but it happened. Nobody around today was involved. We’ve become somewhat wiser as a civilization and frown on mass extermination these days.

We’re also really thankful we live here in America where we can feast on turkey. Liberals would prefer the Venezuelan option of deep-fried hamster.

“Colonization never ended, it just became normalized.” Shut up and pass the gravy. If they want to complain about colonization they should ask the Democrats why the DNC works so hard to keep them down on the plantation. Those Klan sheets are still around, they get passed down from generation to generation and are carefully hidden in the closet. As long as Blacks need welfare, they’ll vote Democrat forever.

You are eating dry turkey and overcooked stuffing on stolen land. pic.twitter.com/1Ob1RgBkvp

Read more of this commentary from The GOP Times:

Along with their offensive tweet, they helpfully include a link to “Find out which ancestral homeland” you might be “currently occupying.” It would be more helpful to include a link to a crime density map superimposed on Democrat voter registrations.

After the Indians were driven into museum-like reservations the crime rate was pretty low. Then, street gangs began taking over. Local unlicensed pharmacist seems to be the BLM occupation of choice, followed by shoplifter, and burglar.

One would think that any one of the Black persuasion would be mainlining the socialist Kool-aid. Liberals keep getting disappointed by Black influencers who act like Oreos. 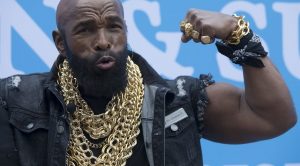 Mr. T sent out a message which slapped BLM upside the head. What fool would say such things? Before he passed out from an overdose of turkey tryptophan the A-Team icon tweeted out a message of his own.

I am taught to care, to share, and to give; “God loveth a cheerful giver” 2 Corinthians 9

Especially because he dared to follow up the first outrage with an actual Bible verse. “I am taught to care, to share, and to give; ‘God loveth a cheerful giver 2 Corinthians 9.”

At least Mr. T is smart enough to realize that despite our checkered past, there is an awful lot to be thankful for right here and now today.

That would mean that America is a great place after all. Despite all the police running around trying to arrest all the amateur apothecaries, looters, and arsonists. BLM can’t stand to even consider such a horrific idea.