Being bullied at school is such a terrible experience and it’s one that can scar you for years after you graduate.

And sadly it happen to a 13-year-old Zane Omlid, who is a student at a middle school in Minnesota and has more than once been punched, pushed, and written on with markers. He’s unhappy, and his mom doesn’t know what to do about the bullying that doesn’t seem to let up.

So when a group of riders hears about a child that is being bullied, they’ll ride out to that kid’s community in a show of support.

They rode in on their motorcycles and shouted for Zane until he came out to face them. While this might seem intimidating, they were there for a very good reason and it was ultimately a happy experience that the teen won’t soon forget.

Zane came out of the home to see the men and women surrounding the house. He walked slowly and unsurely to the street, and then the group started to applaud, including his mom. 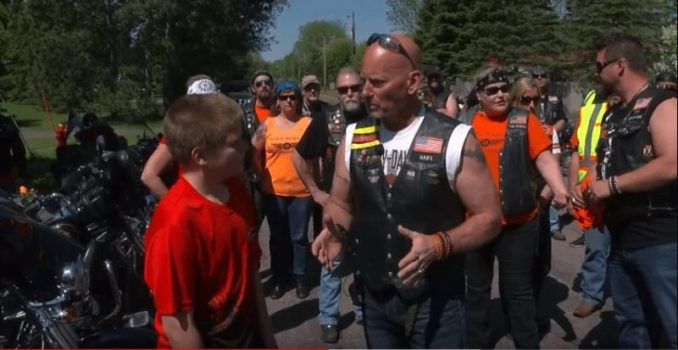 As Zane began to realize what was happening, Carson explained:

“Today is just the beginning, Zane. You understand what I’m saying?”

Carson added as he led the group in another round of applause:

“We love ya. We don’t even know you, alright buddy?” 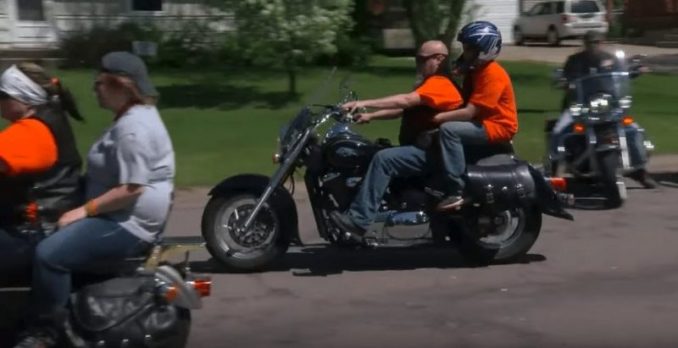 Syd’s Angels’ founder, Greg Carson, described the abuse in a Facebook post, saying Omlid has been kicked, punched, and drawn on multiple times. Despite reporting the bullies to the school district, nothing has been done, Carson said.

Syd’s Angels rode out to Omlid’s community Saturday to rally against bullying and let Omlid know he’s not alone. In a video posted on Facebook live, Carson says school districts should be held accountable.

Carson said in a statement:

Omlid was being bullied so badly, to the point that he didn’t even want to go to school anymore, and it’s no wonder. Classmates were constantly calling Zane names and teasing him. Sometimes, they even physically abused the boy, as his parents claimed he was pushed, punched, and even written on with markers, CBS Minnesota reported.

“It’s awful having to be frustrated every single day when your kid comes home to you, somebody has pushed him down, kicked him, punched him in the private areas, you know, and then draw on them,” said mother, Tracy Malenke.

Sadly, although schools have policies that can lead to a suspension if students are caught bullying, it didn’t seem like Zane’s school was doing much to stop the torment the boy was experiencing.

Luckily, Zane wouldn’t have to suffer much longer after a group of bikers heard what was going on and decided to step in to make sure the bullies knew some tough guys had Zane’s back.

As the statistics point out, thanks to the internet, kids can now bully each other from anywhere, meaning that schools can only do so much. So, the responsibility to end it has to start at home with parents. We must teach our children that being the bully is simply not okay. But, we seem to be failing since there are endless stories about bullying online or in the news, just like Zane’s — or worse.

Shockingly, it all too often goes beyond mean words. Kids are not only sending horrible threats and messages online or spreading rumors about their peers, they are also beating up other kids in bathrooms, on the playground, on their way home from school, or in their own neighborhoods. Children as young as 5 and 6 years old are even sending other kids their age to the hospital with serious injuries after viciously and violently assaulting them.

With children taking their own lives as a result of bullying and bullying even being blamed for school violence and many school shootings, those who stand up against it are increasingly important to our society. Bikers like Syd’s Angels Bikers Against Bullies should be commended for their efforts to help this boy and others by attempting to put an end to bullying. No child should be scared to go to school. Hopefully, this not only deters his bullies and raises Zane’s self-esteem but also makes the parents of those bullies realize it’s time to step up too. We should all start looking out for kids in our community — and that includes ensuring ours aren’t mistreating others.