Jen Psaki’s answer after being asked if Biden “intends to sign executive orders instituting increased Gun control” was a stunning declaration that will go down in history.

Psaki stated in response to the question during Friday’s briefing. “Yes. I can’t give you an exact time frame in part, because they have to go through a review process, which is something that we do from here”

Jen Psaki, American Political Advisor, said “I will note that when we, when the president was the vice president in the Obama-Biden administration, he helped put in place twenty-three executive actions to combat gun violence,” she continued. “It’s one of the levers that we can use that any federal government, any president, can use to help address the prevalence of gun violence and address community safety around the country.”

Biden’s Abuse Continues to the Joy of the Leftist Media

Former Obama Campaign Manager and sycophant Jim Messina extolled Biden’s virtues to MSNBC’s Stephanie Ruhl, and fell all over himself in his fulsome praise of a Democrat-Socialist controlled White House that is acting more and more like a rogue government fighting with its constituent states and people at every turn. 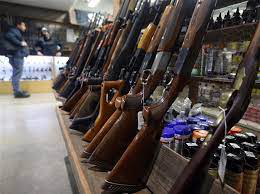 Messina also said seriously“You have Joe Biden, who is the single-best legislator of his time, who’s going to try to find a way to move forward with something,” and added “He’ll use every single piece of the executive order he has, but this is kind of a purpose-built moment for Joe Biden, who’s the guy who can quietly get things done behind the scenes and if there’s anyone who can move this stalemate through, it’s Joe Biden,”