Recently discrimination happened concerning white farmers in America at the USDA and there hasn’t been more of a public outcry. And it seems that the Republicans in Congress have also been silent while plans for billions in federal aid are designated for minority farmers but NOT for white farmers. Joe Biden is continuing where Obama left off with the discriminatory black farmer boondoggle.

And now two U.S. Reps have finally noticed the discrimination against white farmers and are doing something about it. Legislation has been announced by US Reps Burgess Owens and Tom Tiffany that stop the USDA from discriminating against Americans based on race and other characteristics. The irony is that the tables are turned, and the whites are now being discriminated against. Isn’t this the exact thing that blacks fought against in the Civil Rights movement?

Rep. Owens: “Farmers from all walks of life face tremendous challenges, especially as their industry navigates a post-pandemic economy. I’m deeply concerned that Congress feels emboldened to perpetuate a modern-day form of racial segregation rather than provide relief to those who need it most. My grandfather, a respected farmer in the 1950s and ‘60s Black middle class, would be horrified by any policy that seeks to discriminate based on race. Racism was and will always be wrong.”

It’s one thing to provide relief to those who need it, but it is fundamentally wrong to perpetuate policies of discrimination based on race. pic.twitter.com/q7OPhWfXzs

The Agriculture Civil Rights and Equality Act (ACRE) would “prohibit officials at the U.S. Department of Agriculture” from “discriminating or providing preferential treatment to any person based on race, color, national origin or sex.”

Rep. Tiffany: “It’s one thing to gear relief programs to farmers who have fallen on hard times and are struggling to make ends meet. But it is fundamentally unfair for the government to treat farmers differently based on immutable characteristics. To extend assistance to some farmers but not others based on race undermines the constitution’s guarantee of equal protection for all Americans. If we are serious about ending discrimination in the agriculture sector, the first step is for the government to stop doing the discriminating.”

It was a $50K giveaway to any minority who said they farmed. It was billions of taxpayer dollars that ONLY went to minorities. Anyone unfamiliar with the previous black farmer boondoggle under Obama should know about it.

OUR PREVIOUS REPORT ON THE PIGFORD MINORITY GIVEAWAY:

PIGFORD has to be the biggest scam and fraud EVER, but I’ll bet most Americans haven’t even heard about it. IT’S ALL ABOUT FREE MONEY! Yes, free money for everyone EXCEPT white farmers. Our government has spent over 4 BILLION dollars on what was to be a small program to help minority farmers who “felt” they were discriminated against:

Essentially, the process encouraged people to lie and spawned a cottage industry. Claimants had only to file applications for a $50,000 payment by stating that they had “thought about” applying for loans to become farmers.

The Obama administration has again been protected from a troubling scandal by the mainstream media (MSM) using the omission tactic to ignore the scandal, its reality, and the negative blowback attendant to a disturbing story. As sunlight began to illuminate the scandal’s inconvenient and troubling facts, charges of racism were used to silence those sounding the alarm temporarily. Seemingly, the alarm-ringers’ only crime was having the temerity to respond with a politically incorrect point of view to abuses.

The underreported scandal referenced is generally identified as “Pigford.” Pigford’s germination occurred in 1997 as a lawsuit (Pigford vs. Glickman) alleging that 91 African-American farmers were unfairly denied loans by the United States Department of Agriculture (USDA) due to racial discrimination, which prevented the complainants from farming. In 1999, the black farmers won their case.

Pigford has the distinction of being an out-of-control waste of taxpayer funds and/or a cynical attempt by the Obama administration to curry favor with certain minority groups to which neither President Obama nor Attorney General Eric Holder can plead ignorance of involvement. Both have known since the court ruled on the Pigford lawsuit; in 2008, then-Senator Barack Obama supported and voted for the initial settlement funding then, Eric Holder (and Obama) have been involved in overseeing and managing the Pigford “judgment fund.”

The judgment fund announced by Agricultural Secretary Thomas Vilsack and Eric Holder in 2010 was expanded from just over $120 million to $1.25 billion, given the expectation of many more filers.

However, the claimants’ explosion has caused payouts to reach $4.4 billion and has swelled legal fees to over $130 million.

More importantly, the claim’s process created a rush to get a share of the monies allocated to the judgment fund, even if no real claim existed. Essentially, the process encouraged people to lie and spawned a cottage industry. Claimants had only to file applications for a $50,000 payment by stating that they had “thought about” applying for loans to become farmers. Proof of a claimant’s intent to farm also included a statement from that petitioner saying he or she had attempted to farm by planting a batch of tomatoes in his or her backyard and having that statement verified by a family member. In essence, the need to be a farmer at the time of the USDA’s alleged discriminatory actions was not a requirement to share in the financial redress. 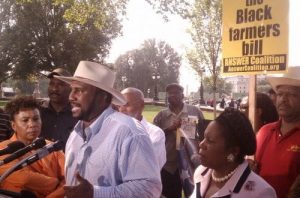 Fraud was endemic to the claims process — for example, every apartment in a New York City building received a settlement of at least $50,000. Further, some families received checks of $50,000 for each family member.

Sources: 100Percent Feed UP, STILLNESS IN THE STORM