A young woman was brutally beaten by her boyfriend then her father took things into his own hands placing a bounty on his head.

In Missouri, a 20 year old woman named Chelsea Simmons was brutally beaten and nearly killed by her 27 year old boyfriend, Cedric Powe. The altercation caused her to lose her vision in one eye.

“Apparently he choked her until she passed out, brought her back, then choked her again and continually stomped on her head,” said Simmons’ stepmother, Melissa Zack. “She’s scared and she probably will be forever.”

Powe, known by friends as Moe, reportedly fled to the south side of St. Louis. Mark Zack, Simmons’ father, offered $500 to anybody that could provide police with information that will help them track down his daughter’s attacker.“He needs to be caught so that this doesn’t happen to anyone else, and I don’t have to worry about it happening to her ever again,” said Simmons’ stepmother.
Doctors say that Simmons was very close to losing her life. She’s lucky to be here but she will probably suffer from pain for the rest of her life because of the altercation.
Below is a picture of Cedric Powe: 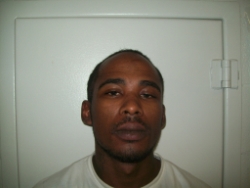 I of course feel bad about what happened to her but come on ladies! If you date a criminal expect to have bad things happen.What is wrong with some women, attaching themselves to men with no real future? There are plenty of hard working single men out there who won’t beat or take advantage, stop chasing these losers.
“Bad boys” are WAY overrated. Get yourself a man with faith in God, an education and parents who raised him to respect women… That’s attractive, not this criminal right here…
Update: Powe was arrested in St. Lois, Mo. where he was extradited back to Illinois and sentenced to 14 years in prison.