On Tuesday, a former Democratic mayor of a Northern California city was charged with child sex assault and felony crimes, according to authorities.

It came after police received a call on March 30 describing several offences said to have been carried out by Jacob, who was elected mayor in 2013 and served one term.

Jacob appeared on Tuesday, in Sonoma County Superior Court, where the number of felony charges was expanded to 11, police said, citing court documents.

Police said the investigation began on March 30 after police got a tip about possible sexual assaults that occurred in the city between December 2019 and March 2021. Investigators identified Jacob as a suspect and took him into custody at a residence in the 7400 block of Woodland Avenue.

Sebastopol Police Chief Kevin Kilgore could not comment on how Jacob and the victim knew each other or provide additional details on the alleged crimes due to the ongoing investigation.

Jacob, 44, is being represented by Santa Rosa attorney Chris Andrian, according to the Sonoma County Superior Court’s website.

Fox News called Andrian’s office for comment on the charges against Jacob but did not immediately hear back.

He is being held without bail on 17 felony charges he had sex with a child 15 years old or under.

Jacob is gay and has been married to his husband since 2019.

Jacob did not make a plea in his first court appearance and is being held at least until further court appearances.
He founded a marijuana dispensary. He has made posts on social media calling for violence against police officers. He has also been a major critic of President Trump and suffers from Trump Derangement Syndrome. 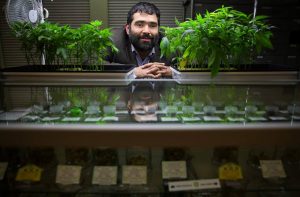 The Post Millennial’s report included the fact that Jacob, 44, is gay and married his boyfriend in 2019. The news outlet also reported on his political activism:

In addition to the former mayor’s accused sex crimes, he has posted frequently in support of violent extremism against police. In June 2020, he thanked Black Lives Matter rioters, glorifying the arrested as “warriors” part of the infantry on the front lines.

“Violence is what it takes to win wars,” Jacob, who also often criticized former President Donald Trump, wrote on Facebook during the riots last summer. “The police beat people daily and kill them regularly, but that’s acceptable.”

In another post the same month, Jacob advocated for defunding police. “Defunding is about re-funding,” he wrote on Facebook. “Defund the police to re-fund the resources we’ve been slashing for generations.”

Jacob served a single four-year term and did not seek reelection, the according to San Francisco Chronicle reported.

He is currently held in the Sonoma County Detention Facility without bail.

The authorities are asking anyone with information about the investigation to contact the Sebastopol Police Department at 707-829-4400 and refer to Report #21-0220.