In the world of strategic weapons, the neutron bomb has a special purpose, kill all the people and leave the buildings standing. A genetically engineered variant of SARS that spreads like wildfire to cause chaos, disability, distraction and economic damage — without actually wiping out an entire population, would be the “neutron bomb” of bio-weapons. China may have invented one.

We live in a world of designer genes where “new and improved” can be a scary phrase. Right now, governments around the planet are devoting massive amounts of money, manpower and resources as they scramble to contain the outbreak of 2019-nCoV. That could be just what the Chinese military ordered. Only, they didn’t expect it to escape.

In the same “coronavirus” family as the common cold, 2019-nCoV infects the nose, throat, and sinuses with the potential for pneumonia-like symptoms. So why is it being treated as if it were Ebola? The response has been totally disproportionate to the threat unless China knows something very spooky.

“The virus outbreak causes pneumonia-like symptoms and prompted China to deploy military forces to Wuhan this week in a bid to halt the spread. All travel out of the city of 11 million people was halted,” NBC reports. “Across China, 15 cities with a combined population of over 57 million people… have been placed under full or partial lockdown.”

The Chinese government is running the show with an iron hand. “the country’s top political body, headed by President Xi Jinping has taken direct control of operations.” Their official spokesman acknowledges that the lockdown of Wuhan, is “unprecedented in human history.” So far, at least 13 other countries have reported cases of the virus.

If chaos wasn’t intended, it certainly is happening. All over the world, the rush to buy face masks quickly led to shortages. In Hong Kong, along the Chinese border, residents “set up roadblocks and clashed with police” when a vacant apartment building was about to be converted to a “temporary quarantine center.”

Wuhan is coincidentally the home of the Wuhan Institute of Virology, “the only declared site in China capable of working with deadly viruses.” Israeli biological warfare expert Dany Shoham told the Washington Times all about it. The Institute’s labs were into the research and development of biological weapons, but not officially. As “part of a dual civilian-military research” operation the work is “definitely covert,” Shoham notes.

China is blaming the outbreak on a local market conveniently located near the bioweapons lab. It could have been the predetermined scapegoat. Especially if that’s where their scientists got their samples to start with. The government is already polishing their press releases in an effort to get in some damage control.

As reported by the Times, “one ominous sign, said a U.S. official, is that false rumors since the outbreak began several weeks ago are being circulated on the Chinese internet claiming the virus is part of a U.S. conspiracy to spread germ weapons. That could indicate that China is preparing propaganda outlets to counter future charges the new virus escaped from one of Wuhan’s civilian or defense research laboratories.”

Wuhan scientists have been studying coronaviruses for a long time, “including the strain that causes Severe Acute Respiratory Syndrome, or SARS.” When asked how the virus might have escaped, Shoham explained, it could have been either leakage or “as an indoor unnoticed infection of a person that normally went out of the concerned facility.”

He had his eye on the place since, “a group of Chinese virologists working in Canada improperly sent samples to China of what he said were some of the deadliest viruses on earth.” Previously, Shohan “identified the secure Wuhan National Biosafety Laboratory… as engaged in research on the Ebola, Nipah, and Crimean-Congo hemorrhagic fever viruses.”

Also, nearby the institute is a separate lab, The Wuhan Institute of Biological Products. It’s a “civilian facility but is linked to the Chinese defense establishment.” It’s widely accepted as part of the Chinese Bio-weapons program. “The biosafety lab is located about 20 miles from the Hunan Seafood Market that reports from China say may have been origin point of the virus,” Shohan points out. 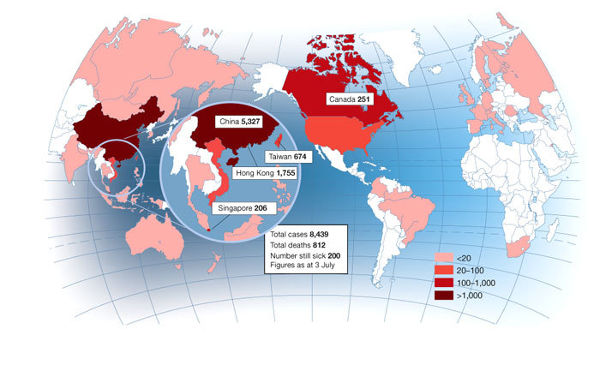 Map of the SARS pandemic.

The virus is spreading exponentially from human to human because “the virus can be spread before any symptoms appear.” That means, “carriers may not realize they are infected before they transmit the virus to others.” Imperial College London researchers estimate “that each person infected has gone on to spread the virus to two or three others.”

If you were going to invade a country, the time to do it is when everyone is nauseous, coughing, and wracked by aches, chills, and fever. You don’t even have to invade. You can cripple a country economically, at least for a short time, by destroying productivity. If the scientists did what they intended, the whole world could be about to shut down for a while, as everyone calls in sick.

Nancy Messonnier, with the Center for Disease Control and Prevention, is preparing for the worst. “We need to be preparing as if this is a pandemic, but I continue to hope that it is not.”