A federal judge is steamed at the State Department enough to accuse them of legal “bad faith.” Shockingly, he signed an order directing the interrogation of Hillary Clinton about her infamous emails. The former Secretary of State will be grilled unmercifully by lawyers for the conservative watchdog group Judicial Watch. Judge Lamberth has a few sharply pointed questions of his own, so Cheryl Mills will also get a session in the hot seat, along with two unnamed “State Department technology managers.” This is absolutely huge.

On Monday, federal judge Judge Royce Lamberth said enough is enough. For the past six years, the Deep-State Department has been acting in “bad faith.” It’s time to come up with some answers and he wants them in the next 75 days. The State Department, he explained, acted in bad faith by lying to Judicial Watch when they swore up and down that “no records existed.” Then, late last year, they suddenly discovered “30 Clinton emails that were previously undisclosed.”

Judicial Watch asked the court for permission to depose Clinton, top aide Cheryl Mills and other former State Department employees in a case which has been trying to pry public records from the State Department for over six years. A “deposition” is a formal interrogation under oath in a lawyer’s office ahead of the court trial. The judge agreed to allow every one of the depositions Judicial Watch asked for. “Any further discovery should focus on whether she used a private server to evade [the Freedom of Information Act] and, as a corollary to that, what she understood about State’s records management obligations,” the Judge wrote. The group may also move forward with a subpoena to Google for “records related to Clinton’s email while she was secretary of state.”

The judge is convinced that Hillary Clinton is hiding evidence. “The Court is not confident that State currently possesses every Clinton email recovered by the FBI.” How could they if they were on the private server she had “wiped” with Bleachbit. “Even years after the FBI investigation, the slow trickle of new emails has yet to be explained,” Lamberth notes. “For this reason, the Court believes the subpoena [to Google] would be worthwhile and may even uncover additional previously undisclosed emails.” 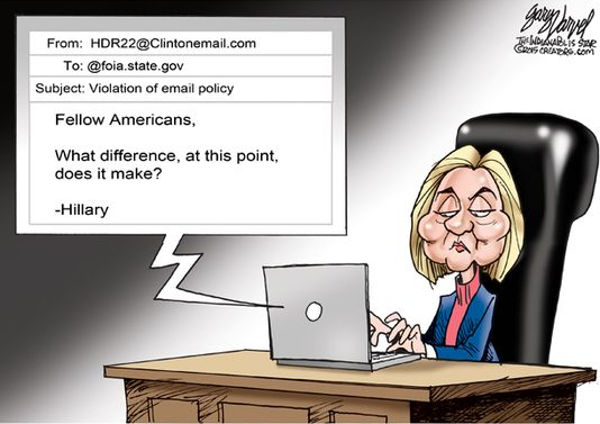 The judge has questions of his own

At the hearing on Monday, Lamberth laid out a whole slew of excellent questions that every conservative American would love to hear the answer to. “How did she arrive at her belief that her private server emails would be preserved by normal State Department processes for email retention?” Was one. Were they supposed to sync up her bathroom server with their own? probably not. “Did she realize State was giving ‘no records’ responses to FOIA requests for her emails? If so, did she suspect that she had any obligation to disclose the existence of her private server to those at State handling the FOIA requests?” More likely, she simply ignored it because after all, laws are for the little people.

Another thing Lamberth wants answered is “When did she first learn that State’s records management employees were unaware of the existence of her private server? And why did she think that using a private server to conduct State Department business was permissible under the law in the first place?” Hillary has some “‘splainin” to do in her upcoming interrogation.

Judicial Watch founder Tom Fitton is absolutely thrilled. “Judicial Watch uncovered the Clinton email scandal and we’re pleased that the court authorized us to depose Mrs. Clinton directly on her email conduct and how it impacted the people’s ‘right to know’ under FOIA.” Clinton’s lawyers are hiding from reporters and “didn’t immediately respond to a request for comment.”