The protesting that surrounded the confirmation of Supreme Court Justice Kavanaugh was something else to say the least.

To call it a circus would be something of an understatement. Shoot, if one were to take a look at how many people were arrested during just the confirmation hearings alone became almost a game that people could place bets on.

It was something that I personally witnessed. My father had recently come to visit for a few days during the confirmation hearings and he had watched day one and immediately inquired to me the next day if I would be willing to take action on the over/under of how many people would be kicked out or arrested. Dad must have been a famous sports handicapper in a past life because he managed to get within three people on day two.

Now, fast forward and you have the run up to the confirmation vote itself. Liberals were losing their minds at a pace that nobody really thought possible. These were folks that likely didn’t even know what the Supreme Court was until the person paid them to protest told them. 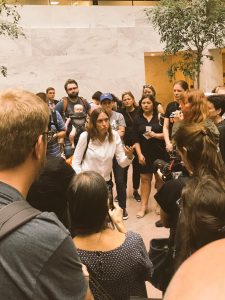 Some of the protesters were caught on camera being trained on what to say! To top it off, the person who was training them is highly involved as a co-founder of a Bernie Sanders group called the People for Bernie.

Let’s watch the video of the Kavanaugh protesters being trained on what to say, where to go, what to do, etc.

This took place at the Hart Senate building. You can hear the woman telling them what to say, then they were repeating it back to her, practicing for their big moment.

This woman is giving instructions to protesters, as protesters repeat them back. #KavanaughVote pic.twitter.com/jDPQzebDnl

She wasn’t the only person directing the protesters on what to do. It was like there were multiple people training people what to say, telling them where to go, and it seemed more like a coordinated attack on the United States government than a protest.

This man was telling people where to go.

This man is leading protesters to the private subways in the Senate Hart basement. pic.twitter.com/EXBoQRWXAR

At one point they were saying “go get him” as a senator walked by. They wanted to harass him and pressure him into voting “no” on Kavanaugh.

“Go get him” said the leader of the protesters as Louisiana Senator Kennedy walked by. “Super-asshole” he later described him to me. pic.twitter.com/aB7MhDXGzJ

Brett Kavanaugh was finally confirmed into the Supreme Court after being faced with a circus act of sideshows from the Democratic Party. Everything from gang rape allegations, multiple stories from people with no credible witnesses, and a barrage of protesters at Capitol Hill tried to stop it, but nothing could.

The Democrats did everything they could to push Kavanaugh to step down, beg people to vote no, and delay or prevent the confirmation. The Democrats failed and the Republicans were victorious in attaining their goal of using the FBI to prove the Democrats wrong and throw the book away on false accusations presented by Christine Blasey Ford and several others, none of whom seem to have a straight story, credibility, or anything but political motivation put upon them by possible political pressure from the Democratic Party.