Here’s liberal logic for you. If someone disagrees with their views you’re a hater… if they disagree with your views they’re a hero!

Because the liberal leftist view is the only right view. Okay…

C.E. Dyer reports that a Christian printer in Kentucky objected to printing t-shirts that went against his religious beliefs and last year he won the case waged against him. Now, the case has hit appeals and he’s back in court fighting for his rights.

A lawyer representing a Kentucky print shop owner who chose not to print gay pride festival T-shirts argued in a hearing this week that the government cannot force a person to create speech against his or her beliefs.

Blaine Adamson, owner of Hands On Originals in Lexington, Kentucky, turned down business due to his religious beliefs in 2012. He chose not to print shirts for the Gay and Lesbian Services Organization in advance of a gay pride festival.

The LGBT organization filed a discrimination complaint against Adamson with a local human rights commission.

In a statement, Campbell asserted: “Protecting Blaine’s freedom protects everyone’s freedom, regardless of their beliefs or convictions.”

“No matter what you believe, the government shouldn’t be able to force you to create speech that conflicts with your deepest convictions.”

If a business decides they don’t want to do something, such as print a t-shirt with a message that goes against their beliefs, the customer is free to go elsewhere. 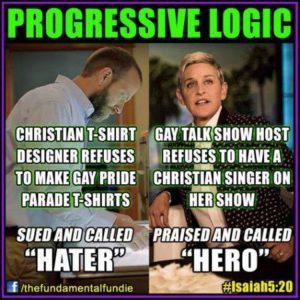 Ellen DeGeneres decided not to let Gospel singer, Kim Burrell perform on her show and she’s hailed as an LGBT hero!

Pharrell Williams appeared on NBC’s Ellen Show on Thursday as scheduled, but she had chosen a different performer. Ellen DeGeneres held to her decision to refuse Kim Burrell from being a featured guest on the show. Although both Ellen and Pharrell attempted to dampen the controversy of their decision, they failed to be authentically inclusive.

The song featuring Kim Burrell, “I see victory,” was originally scheduled to be performed on the Ellen show. After the decision to replace her song, Pharrell chose a different song — that no one cares about– from his soundtrack, in order to keep to the original format.

“She was doing a Facebook Live, and she said some very not nice things about homosexuals,” Ellen explained after Pharrell’s performance. So, I did not feel that it was good of me to have her on the show and give her a platform after she is saying things about me.”

Hypocrisy at it’s finest! What do you think?