“Three in four Americans think the jury reached the right decision in which former police officer Derek Chauvin was found guilty of murder in the death of George Floyd, a plurality opinion that stretches through all ethnic, age, and partisan groups,” according to a poll released this weekend by CBS News and YouGov.

CBS News tucked the results to the issue of how well “your local police are doing” at the end of the post.

According to the survey, 70% of black Americans believe their local police are doing “very well” or “somewhat well.”

Based on this evidence, it appears that there is a significant disparity in support for police officers based on race. However, the “good” categories — “very good” and “somewhat good” — are separately defined, while the “bad” categories are grouped together — “somewhat/very bad.”

What were they thinking when they did this? Possibly to insinuate a far greater racial divide in support for local cops than actually exists. 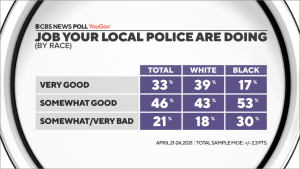 People also have a mostly positive view of their local cops. The majority of Americans think they are doing a decent job.

The majority of Americans believe there is a larger issue with how police handle Black Americans.

Floyd’s death has influenced public perception of police officers and their treatment of minorities in the United States. Many Republicans believe that interactions between minorities and law enforcement are perfect.

The majority of Americans agree that the deaths of Black Americans in police incidents are symptoms of a larger problem.

In the United States, people’s perceptions of minority-police relations are closely related to their views on overall race relations. Both are thought to be evil in general.

Three out of five Black Americans believe police-community relations are poor in their own neighborhoods.

For a long time, Americans have been concerned about the condition of race relations, though Republicans are more optimistic. Many people believe that things are better in their own neighborhoods than they are in the country as a whole. 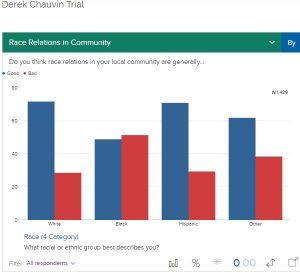 Although black people perceive police relations in their neighborhoods to be poor, white people believe the opposite. In their own neighborhoods, two-thirds of white Americans (66%) say police-minority community relations are fine, while one-third (34%) say they are poor.