If you’re an idiot to begin with, which this girl clearly is, you probably shouldn’t add alcohol on top of that because your levels of stupidity will peak to levels you had no idea it could reach. Just ask the poor student who sent out a Snapchat-filtered photo of himself for his student ID. Or how about that drunk girl who put on the greatest performance of Smooth Criminal ever? Although to be fair, that was less stupid and more brilliant.

The point is, some people can’t handle their liquor, and just like the girl below who seemed to be the perfect example after she thought it would be a good idea to slap a police horse.

Some students at Queen’s University homecoming have given the internet a special, precious gift: A video of a drunk young woman slapping a police horse’s ass and promptly getting kicked by the animal.

In the viral video, a blonde woman wearing a red-striped, dark-colored polo runs up to two police horses holding human officers, slaps the horse, gets kicked, and falls down face-first. 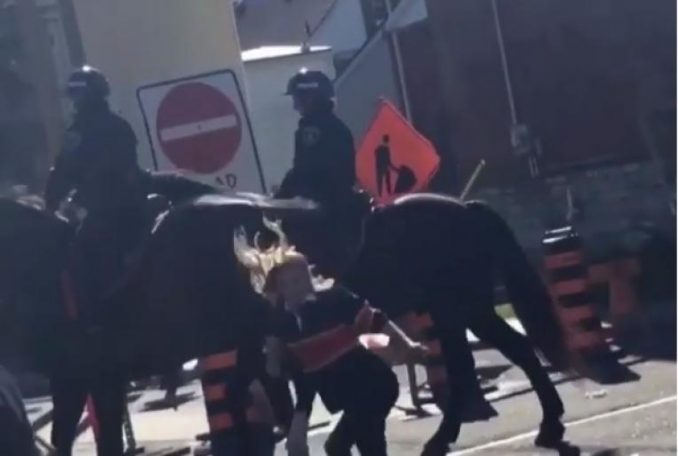 The girl was instantly knocked to the ground and appeared to smack her head in the middle of the street, but quickly scrambled to her feet as her friends laughed, hollered, and gasped. A female friend attempted to help her back across the street, but the student shook her off and rejoined her group as she held her face.

The female student will also undoubtedly suffer from a very large bruise, on both her leg and her ego.

The drunk student and two other people were charged criminally for this dumb act that occurred at the annual Queen’s University homecoming celebration in Kinston, Ontario. 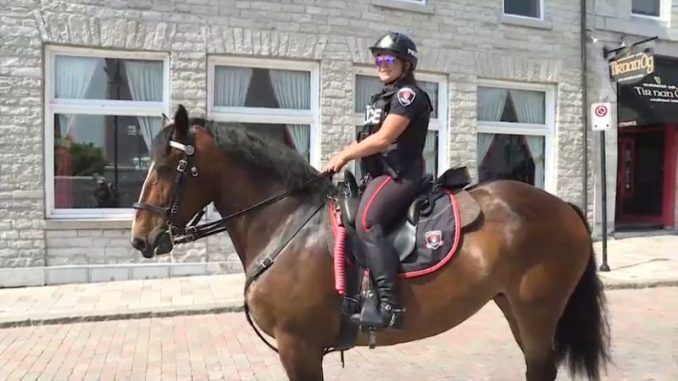 The horse Murney was slapped multiple times while on patrol by idiots. The woman in the video was released at the scene and will be receiving a summons, and the two men arrested were charged with causing injury to a law enforcement animal.

No word yet if criminal charges will be set on the dumb woman, but being kicked by the horse was sure nice to see.

Watch the video below: