The media is failing to see the connection between a number of restaurants going out of business and the recent raise of minimum wage to $15/hr.

Or they’re choosing to stay blind to the fact that the critics were right!

Restaurants are rapidly going out of business in the Bay Area, after San Francisco passed a $15 minimum wage law in 2014 and the State of California followed suit in 2016.

Yet the media are struggling to make the connection between high minimum wages and restaurant closures. 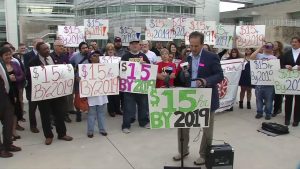 The East Bay Times, for example, asked Tuesday: “What’s behind the spate of recent Bay Area restaurant closures?” It barely mentioned new minimum wage laws, brushing them aside as if they were largely insignificant.

It is true, of course, that merely because one thing follows another does not prove that the second was caused by the first.

The “post hoc, ergo propter hoc” fallacy that is familiar to first-year economics students would apply to this case as well.

Yet that does not mean the prior factor should be excluded as a cause.

But that is largely what the Times seems to have done, even though the closure of businesses and the loss of restaurant jobs is exactly what critics of the minimum wage hikes predicted.