On Friday, Minnesota high school student was being falsely accused of sending racist messages to a Black classmate.

A sophomore at White Bear Lake High School, Avery Severson was falsely accused of sending the racist direct messages that caused outrage and a student walkout.

But school officials said that an FBI investigation revealed that the female student who created the hateful messages wanted ‘to raise awareness of social and racial injustice’ by staging the stunt. They refused to name the true perpetrator.

‘I was just shocked when I saw that they were accusing me and I felt unsafe. I felt unsafe at school,’ Avery told Fox News on Friday.

Severson was accused by a Black classmate of sending racist direct messages on Instagram.

“Screenshots from an alleged conversation between Precious Boahen, who accused Severson of racism, and an account called “GoWhiteBear,” show the anonymous account using racial slurs. It’s unclear who was ultimately behind the anonymous account,” according to the Daily Wire.

The so-called racist messages were discovered to be a “hoax” after White Bear Lake High School, the FBI, and the local police department investigated the situation. The district’s superintendent sent an email concluding that the Instagram messages were indeed a “hoax.”

“The initial investigations by the FBI, our local police department, and the school district uncovered that the social media posts were not what they appeared. The original messages were found to be a hoax sent under false pretense by an Instagram account that was created by a student. The individual who created the social media posts poses no threat to our students of color,” the email reads.

The initial rumors surfaced after Severson was trying to form a Turning Point USA chapter at her high school. Right as her Conservative club was about to be formed, the racist messages surfaced on Instagram and suddenly Severson was in the spotlight as an accused racist.

Below are the screenshots of the conversation online. 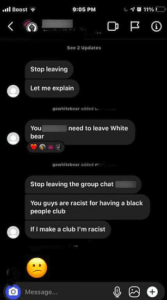 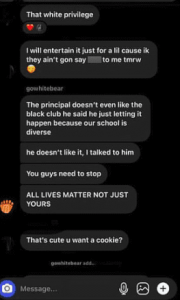 Earlier this week, White Bear Lake Superintendent Wayne Kazmierczak admitted that the messages were a ‘hoax’ in a note to families, Minnesota news site Bring Me the News reported.

He later apologized for using the term ‘hoax’, saying on Wednesday that he in no way intended to ‘minimize the impact that racism or racist acts has on students and families who have been marginalized throughout history and in White Bear Lake Area Schools.’

‘With the assistance of the FBI, a juvenile female has been identified as the creator of this anonymous account,’ the district said.

‘The juvenile involved indicated during the investigation that the purpose of their post was to raise awareness of social and racial injustice due to past incidents that occurred at school, the statement added.
‘We shared this information with the school district and added that the investigating officers believe the juvenile does not pose a physical threat,’ it continued.

‘Nevertheless, the postings have caused tangible fear and alarm throughout our community,’ the statement hastened to add.

‘It is critical to acknowledge the importance of these conversations related to racial equity and justice affixed to this incident, and to commit to on-going dialogue that leads to meaningful outcomes.’

The anonymous person who sent the messages is now retained by the school officials.