As Los Angeles students return to school on Wednesday, Los Angeles Unified School Board Vice President Jackie Goldberg was demanding answers. She’s “shocked and angered” that a Delta airlines pilot chose to bomb the playground of Park Avenue Elementary and five other schools with jet fuel.

Everybody understands that there was an emergency, and that the pilot needed to dump fuel in order to land safely. What angry residents aren’t getting any good answers to, is the question of why the fuel was dumped over an inhabited area. A total of 60 people were treated for minor injuries including 26 children.

There’s a possibility that language barriers were a factor. Most Chinese pilots are trained right here in the United States, but they have terrible difficulty learning English enough to communicate properly with the tower.

According to inspector Sean Ferguson of the Los Angeles County Fire Department, just after noon on Tuesday Delta Air Lines Flight 89 had an emergency. The plane had just taken off from the Los Angeles airport on the way to Shanghai, China. If the pilot was Chinese, it could explain the mystery.

The Boeing 777-200 had 288 passengers aboard and enough fuel to fly all the way across the Pacific Ocean. Shortly after takeoff, the crew “experienced an engine issue requiring the aircraft to return quickly to LAX.” 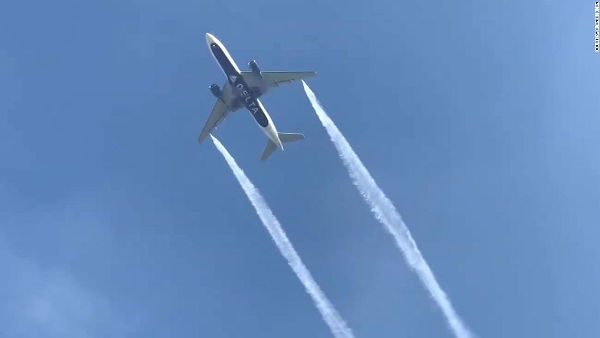 With full gas tanks, they would have been moving way too fast to land without overshooting the runway. They had no choice but to jettison fuel. The question became where to dump it.

The Federal Aviation Administration issued a statement saying they are “thoroughly investigating the circumstances” and suggested the pilot might not have followed the rules.

“There are special fuel-dumping procedures for aircraft operating into and out of any major U.S. airport. These procedures call for fuel to be dumped over designated unpopulated areas, typically at higher altitudes so the fuel atomizes and disperses before it reaches the ground.”

While, in an emergency, plane captains are “authorized to break any rule in the book,” retired pilot Douglas Moss relates, “He still tries to adhere to as many of the rules as he can.” While fuel dumping is rare, consultant Ross Aimer can’t remember “anyone dumping fuel over population.”

What isn’t clear is whether or not the plane ever asked for the advice.

In May of 2018, Two overworked Northern California flight instructors got so fed up with Chinese students putting their lives in danger because of poor English that they decided to make a “citizens’ deportation.”

The general manager of IASCO Flight Training, Jonathan McConkey, and his Chinese speaking assistant, Kelsi Hoser, kidnapped the student. “You’re going home, with or without your luggage,” they insisted.

“If you cannot speak English, you are not going to be able to stay here.” They were the ones who were arrested, but the point is that their student’s English was so terrible that it put their lives in danger.

There are now so many Chinese student pilots being trained, that the limited number of instructors are starting to snap. One former IASCO instructor filed a lawsuit claiming “many of IASCO’s Chinese students spoke so little English that they could not safely fly.”

The instructor was nearly killed because his student misunderstood instructions and “nearly crashed into another plane.” Did something like that happen on Tuesday?