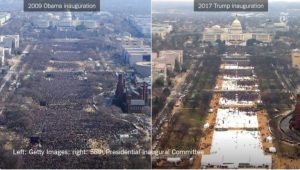 At a time when there should be national unity, a media war has erupted between the size of Obama’s and Trump’s, err, Inauguration Day crowds.

The size of the crowds is being hotly disputed as a flashpoint between the Democratic Party and its supportive media, who want to delegitimize the new president, and the Trump administration, which wants the symbolism of a massive crowd on the Washington mall to defy the opposition’s narrative.

“I have a running war with the media,” Trump said, adding how he really feels, “They are among the most dishonest human beings on earth.”

As with all narrative battles, imagery is often deployed by political operatives in an attempt to bolster support or to undermine one’s opponents.

A viral image put out by the New York Times, and subsequently adopted by much of the media, has been utilized by his opposition as a way of demonstrating that Trump’s crowd was substantially smaller than former President Obama’s in 2009.

According to 2009 address analysis, drawing from satellite data evaluated by crowd size analysts, former President Obama drew a record 1.8 million to the Washington mall. It was a historic event in the sense that no African American had been elected president before; this alone would draw numerous loyal crowds.

The real question here is…who cares about the crowd size!?

If the crowd jumped off a bridge would you jump too?

All that matters, whether it’s popular with the world or not, is that Donald Trump brings America back to what it was founded on. God bless America!