In what CNN is calling “one of the most chilling White House moments in modern history,” President Trump and his team of top experts braced Americans to prepare for the “painful” two weeks ahead. Because Covid-19 can be spread by people who aren’t feeling the slightest bit sick, the experts are considering advising everyone to cover their face in public.

We’re in for a painful two weeks

The mood at Tuesday’s virus task force briefing was somber as President Donald Trump explained to the nation that – even with the current level of extraordinary measures in place – a lot of people are going to die. Social distancing and lockdowns have had a dramatic effect to lower the numbers, but not enough. The data proves that following the guidelines is literally a matter of life and death.

Without the lockdowns and other procedures in place, the experts projected that 2.2 million people would die. Even with all the efforts to quarantine and contain the virus spread, it will still be painful. We can unfortunately expect between 100,000 to 240,000 deaths in the months ahead.

President Trump predicts that after we make it through the next 30 days, there will be “light at the end of the tunnel.” His hopes that the economy would see an Easter resurrection were dashed by the harsh reality displayed by the health department data. The next two weeks will be “very, very painful.”

“I want every American to be prepared for the hard days that lie ahead,” the president warned. “We’re going to go through a very tough two weeks.” We will get through, but “it’s absolutely critical for the American people to follow the guidelines for the next 30 days.” He stresses that “it’s a matter of life and death.” The president urged everyone to heed the government guidelines to limit group size, work from home, and avoid dine-in restaurants or bars. 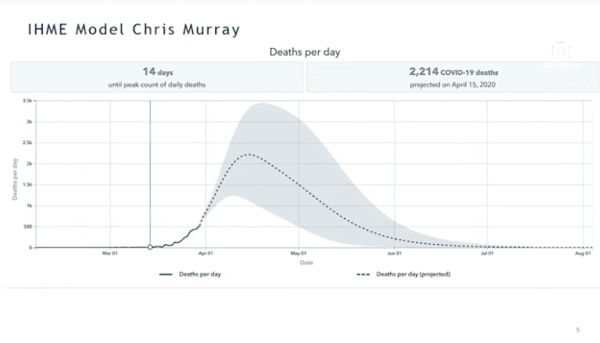 The data and modeling says it all

Dr. Deborah Birx, the task force coordinator, brought along an attention grabbing slide show. Her data and modeling projections show “an enormous jump in deaths.” Somewhere in the range of 100,000 to 240,000 people could succumb to the virus. Another curve on her chart shows just how bad things would have been if nothing had been done. That chart projected as many as 2.2 million deaths.

The models predict that with the painful isolation restrictions in place until the end of April, the peak will occur mid-month. “There’s no magic bullet. There’s no magic vaccine or therapy. It’s just behaviors. Each of our behaviors translating into something that changes the course of this viral pandemic over the next 30 days,” she noted.

Dr. Anthony Fauci, director of the National Institute of Allergy and Infectious Diseases, agrees with Dr. Birx. “We’re doing everything we can.” He advises avoid unnecessary travel, don’t visit nursing homes and practice good hygiene. Vice President Mike Pence pointed out that the “mitigation efforts” are having an impact. “We have reason to believe that it’s working. Do not be discouraged.”

You don’t necessarily need a “mask” but because this virus can spread before people even know that they’re sick, the health experts are rethinking their strategy. They originally believed that masks would do more harm than good by lulling people into a false sense of security, while taking masks away from health workers and first responders who really need them. A look at the computer models has them reconsidering.

“My feeling is,” President Trump suggests, “if people want to do it, there’s certainly no harm to it. I would say do it.” You don’t have to get fancy. “But use a scarf if you want, you know? Rather than going out and getting a mask or whatever.”

Wednesday morning, Surgeon General Dr. Jerome Adams told ABC “we’ve learned there’s a fair amount of asymptomatic spread and so we’ve asked the CDC to take another look at whether or not having more people wear masks will prevent transmission.” They want to save the N95 respirators for health workers but the experts are now suggesting that any “fabric covering of the nose and mouth could prevent the virus from reaching other people.”

In order to highlight the distinction, there’s been a lot of conversation about how to word the guidelines. Instead of referring to “masks” they’ll be called “face coverings” or “courtesy masks.” Dr. Fauci says he would “lean toward” recommending that the general public wear facemasks, but only “if we do not have the problem of taking away masks from the health care workers who need them.”

“Particularly now that we’re getting some inklings that there’s transmission of infection from an asymptomatic person who is not coughing, who is not sneezing, who just appears well. Well, then how do you think that’s happening?” Since there now seems to be a risk from the “slight aerosol in which you’re talking to somebody,” Dr. Fauci says it’s time to start kicking it around. “Something doesn’t have to be 100% effective to be beneficial.”