All the lies that being made day by day are getting more preposterous.

Jen Psaki, White House press secretary told reporters that President Biden is so healthy, she sometimes has a hard time keeping up with him.

During the White House’s Monday press conference, Psaki was responding to a report by The Washington Post about the president’s workout routine and if he is still using a Peloton stationary bicycle.

Psaki said she did not have any information to share on Biden’s “private exercise regime” but said that she sometimes has trouble keeping up with the 78-year-old president when out and about with him.

“I can tell you, having travelled with him a fair amount, sometimes he’s hard to keep up with,” Psaki said.

Psaki is asked about Biden’s health regime: “Sometimes he’s hard to keep up with.” pic.twitter.com/ORyBDiVaQQ

In March, Biden fell while ascending the steps of Air Force One. The White House quickly asserted that Biden was fine after the fall.

“I know folks have seen that President Biden slipped on his way up the stairs to AF1, but I’m happy to report that he is just fine and did not even require any attention from the medical team who travels with him,” White House communications director Kate Bedingfield said at the time. “Nothing more than a misstep on the stairs.” 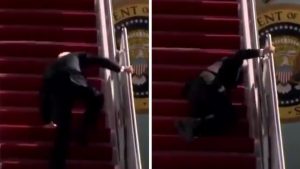 A different White House spokesperson later blamed the wind for toppling Biden as he climbed the stairs to the presidential jet.

The steps to Air Force One have proven to be a difficult obstacle for many American leaders, including President Gerald Ford, who nearly fell head-first down the steps in 1975.

It was last year in late November when Biden suffered a hairline fracture in his right foot while playing with one of his dogs.