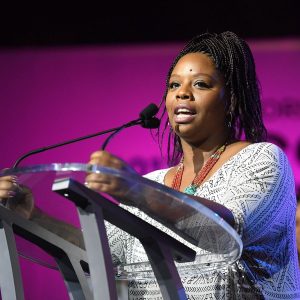 Palmer’s daughter Breonna Taylor was killed last year during a knock-and-announce drug raid, in which her boyfriend shot at police and they returned fire. LMPD Sgt. Jon Mattingly was shot during the exchange and has now recovered.

She said the group fundraised off from her daughter’s death yet failed to use even a nickel of it to aid the family in their time of need.

She is calling them frauds and that she is sick of hearing about them. She is no fan of the BLM movement.

Breonna Taylor died during a police knock and announces the raid. Taylor’s boyfriend admits he shot first and an officer was wounded and Taylor was hit and died from the exchange. There were rumors started that Taylor was killed as she laid in bed asleep.

BLM used the tragedy to raise money but they kept it all and did not share it with Taylor’s family. She is angry that while she worries about making the rent, a member of BLM can buy four houses.

Last September Kentucky Attorney General Daniel Cameron announced that there will be no charges filed against two of the Louisville police officers involved in the raid but a third policeman was charged with wanton endangerment which carries a penalty of one to five years.

“I have never personally dealt with BLM Louisville and personally have found them to be fraud, Attica Scott another fraud,” Breonna’s mom Tamika Palmer said in a Facebook post.

She concluded with: “I’m a say this before I go I’m so sick of some of y’all and I was the last anybody who needs it I’m with this shit enough is enough!!” 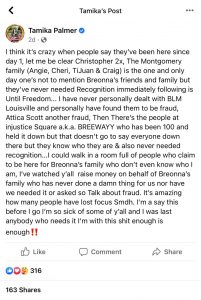 $12 million dollar settlement was given by the city of Louisville Palmer and her family.