Letting our little children try to do little things for themselves is good for their development; however, it can also be quite hard to let go sometimes.

When we were young, we always try to prove to our parents and older sibling that we can do everything they can do. This brings us to today’s upsetting story about a four-year-old baby girl named Kaya.

On a Thursday afternoon, Kaya Langmead was visiting a McDonald’s over lunchtime when Nicole, her mom decided to let this little girl go into the bathroom alone.

Kaya recalled, “We was at McDonald’s and mom let me go to the toilet like a big girl,”

Regrettably, it wouldn’t be a good encounter for this little girl.

Nicole opted to just wait outside the restroom thinking that Kaya was old enough to go to the bathroom alone. But just before Kaya entered, the mother notices two teenage girls leaving the facilities, laughing. Only later would she realize that their giggles were a threatening sign of things to come when the little girl came back from the toilet in complete trauma.

“These two girls came out of the bathroom laughing. They were probably in their early teens. I didn’t think too much of it and Kaya went into the toilet. A short while later she came out in tears.

The little girl rushed out of the bathroom and into Nicole’s arms crying. Kaya explained to her mom that something had hurt her behind. The mother took a look at her daughter’s backside and noticed the skin had been ripped from the little girl’s legs, making her red and raw. Then, the little girl told her mom that she had become “stuck” to the seat and had to forcedly remove herself from the toilet seat.

“I was completely shocked and I then checked Kaya over to see how badly she had been marked. My daughter was left in tears and the skin was ripped off the back of her legs. She came out in tears and told me that she had become stuck to the seat. Kaya said something had hurt her bum, but it never crossed my mind it would be glue.”

However, when she went into the restroom to look over, that’s exactly what Nicole found.

Nicole added, “I thought maybe the seat had moved or something, but when we checked it over there was glue everywhere.

After investigation, they found that the two giggling teens, who just left the bathroom laughing, had put superglue on the toilet seat in some kind of savage prank. No one found it funny, especially not Nicole or Kaya, who had a very tremendous reminder of what had happened after Kaya’s skin was torn from her little body.

Sadly, it took almost took five days for the glue left on the little girl’s skin to come off, but Kaya still remained red, raw, and emotionally scarred. 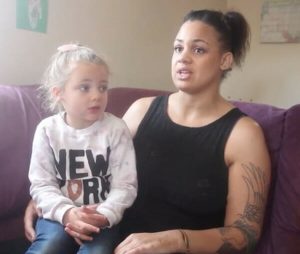 “To the two young blonde girls that thought it would be hilarious to put superglue on the disabled and baby changing toilet in McDonald’s, I just want you to know that I’m still having to console my four-year-old daughter who was unfortunate enough to use the toilet after your little prank. The backs of her legs and bum are red, raw after the glue had stuck her to the seat and she has been in tears on and off since. I hope you’re proud of yourselves. Your families must be so proud.”

The McDonald’s staff notified the police authorities, who reviewed CCTV footage of the incident and set out to find the girls responsible for the incident. The two tricksters, one with long blonde hair and the other with shoulder-length brown hair, were finally tracked down.

“Following injuries to a four-year-old girl at the Mcdonald’s … police identified two juvenile girls who were subsequently interviewed by police.”

According to the police, both apologized to Nicole for what they had done to her little child.

“The two girls immediately accepted what they had done, were sorry, and have apologized to the victim’s mother for the upset caused to her and her daughter.”

The spokesman also added that the authorities had “subsequently taken appropriate action against the offenders.” Police refused to say, however, what that action was.

“Police have been in constant contact with the victim’s mother throughout the investigation and she is happy with how this has been dealt with and the outcome. This matter is now closed, and given the age of the people involved in this case, we will not provide any further comment relating to this matter.”

Although the police authorities might not have anything more to say about this very unfortunate incident, but social media users most certainly did. The netizens said that the girls should have given a harsh penalty for their prank, such as having their own behinds glued to a public toilet seat so that they would get the message that their prank wasn’t entertaining but rather hurtful and dangerous.

Kaya Langmead’s experience serves as a reminder that evil walks among us, so we have to always check our seat before we sit down. We don’t know what some barbaric people could have done just to pull a prank.