During the past week, the United States has been in a heated debate over the kneeling of professional athletes in the NFL during the playing of the national anthem.

Many Americans see the move as disrespectful to the flag and also to the people who have given their lives to fight for our nation, to defend each and every citizen, and to hold the ideals and principles that are symbolized by the national anthem and the flag. 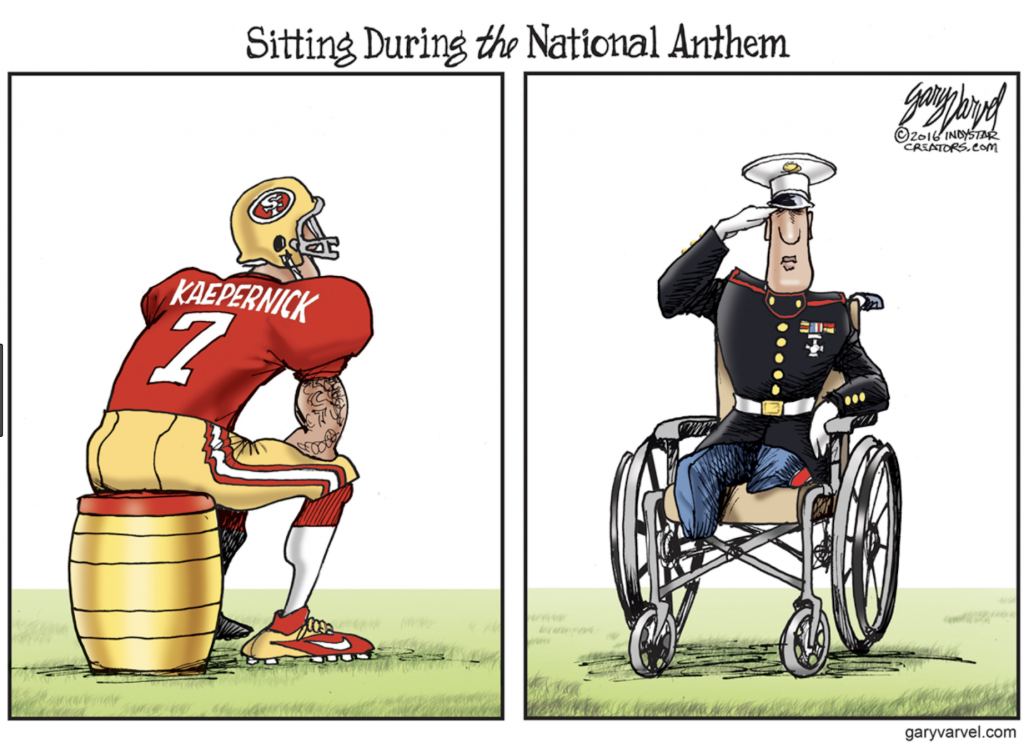 Then to make things worse in this horrifyingly divided nation, one of the most devastating tragedies in America struck history in Las Vegas over the weekend.

A murderous male filled with evil and hate opened fire on a huge Country concert filled with people. These are the same type of people who are honored to represent the anthem and flag, and rose to the occasion to display their respect.

. He has been kind enough to share his story and how he managed to escape the “pure chaos and carnage” that took place on The Strip.

Bleck suggested the staggering death toll could have been even higher had it not been for the brave efforts of first responders and military veterans at the show. “In a world where everyone’s kneeling, I saw hundreds of people standing up and running towards the danger,” he stated.

He spoke of how people used their bodies as shields for others, coached those around them on how to avoid being a target, guided others to cover and safety, broke down barricades to use as improvised gurneys and even used their fingers to temporarily plug bullet wounds until medical care could arrive on scene.

Bleck recounted how the gunman was seemingly using an automatic weapon to spray the crowd and how the design of the concert venue ultimately created a bottleneck that trapped many concert-goers inside the free-fire zone as if they were fish in a barrel.

“If you fire a round into that crowd, you’re going to hit somebody,” Bleck said. “There was no escape … It was horrible.”

In a separate interview with NBC’s “Today Show,” Bleck reiterated, “You saw a lot of ex-military just jump into gear. I saw guys plugging bullet holes with their fingers.”

“While everyone else was crouching, police officers (were) standing up at targets, just trying to direct people, tell them where to go,” he continued. “The amount of bravery I saw there, words can’t describe what it was like.”

Of the shooter, Bleck said, “He was just spraying the crowd. He was relentless. There was no stopping. You had five, maybe eight seconds to move from cover to cover to try to move and get out of there as he reloaded.”

Bleck didn’t realize until later that the gunfire had been coming down from the 32nd floor of the Mandalay Bay Hotel that was across the street from the site of the concert, instead thinking at the time that the murderer was on the ground working his way through the crowded venue.

“There was just no telling. And then it would echo throughout the area, so nobody knew where to go,” he said. “And then all of a sudden people would run away from a safe area, but you didn’t know if it was safe. It was just absolute chaos and carnage.”

Yet, despite the unknown location of the shooter and the certain danger of uncovered movement, many men and women pushed those concerns aside and bravely stood in defiance of the withering hail of bullets to serve their fellow human beings in a time of crisis.

That is what America is all about, and that is why we stand respectfully for the flag and national anthem, in honor of those kinds of people — people who truly make our nation the greatest on earth.

Please share this story on Facebook and Twitter so everyone can see what one survivor of the Las Vegas massacre had to say about the bravery displayed by former military and first responders.