On Thursday, leaders of the G20 nations had a virtual meeting to discuss ways to protect workers and minimize disruption to the global supply chain. “It was a very good conversation,” White House adviser Kellyanne Conway told reporters.

World economy in for an ‘unprecedented’ shock

According to economic analysts at Moody’s, “The G20 economies will experience an unprecedented shock in the first half of this year and will contract in 2020 as a whole.” What that means is that we’re in for “the most violent recession in recent history.”

“As the world confronts the COVID-19 pandemic and the challenges to healthcare systems and the global economy, we convene this extraordinary G20 summit to unite efforts towards a global response,” The king of Saudi Arabia proclaimed.

At least temporarily we’ll be looking at U.S. unemployment around 30 percent. Europe, Asia and the rest of the world are in the same boat. World wide, three billion people are locked down in quarantine as more than 21,000 lives have been lost. Experts from around the globe are predicting “more damage than the Great Depression.” 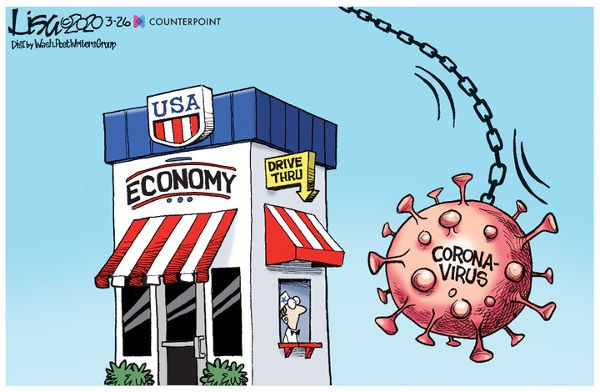 The whole of humanity

He asked for each country to chip in $2 billion “to help the world’s poor.” Every country has been fighting their own battles but “global action and solidarity are crucial,” Guterres asserts. “Individual country responses are not going to be enough.”

WHO chief Tedros Adhanom Ghebreyesus pleaded with richer nations “to offer support to low and middle income countries, including those in Sub-Saharan Africa.” In the Philippines, nine “front line doctors had died after contracting COVID-19.”

Russian President Vladimir Putin told those gathered for the video-summit he hoped they could come up with “a common plan” to support their economies and suggested “a moratorium on sanctions related to essential goods.” Another of his ideas was the creation of a dedicated account with the International Monetary Fund to “fight the spread of the virus.”

President Donald Trump asserted that despite half the U.S. under lockdown today, his administration will decide soon as to how much of the country can be released back to work by Easter Sunday. “We want to get our country going again, but I’m not going to do anything rash or hastily,” he assured.