Former President Donald Trump’s wall along the U.S.-Mexico border is now being considered to restart by the current administration as they struggles to maintain control of the worsening border crisis.

Unfinished sections of the wall have become convenient gateways for migrants from Texas to California, to enter the U.S. Near the gaps, Border agents park their vehicles to monitor the access points.

The gaps in the border wall under construction by President Biden, is now being taken advantage by illegal immigrants.

“The project is three-quarters done. At least, they should be allowed to tie together the primary fence. Otherwise, we’re trying to catch these people in the worst possible place. It’s just sucking our manpower,” the agent continued.

Biden Department of Homeland Security Secretary Alejandro Mayorkas said during a conversation with ICE employees last week that the administration was considering finishing “gaps in the wall.”

“It’s not a single answer to a single question. There are different projects that the chief of the Border Patrol has presented and the acting commissioner of CBP presented to me,” Mayorkas said, according to notes of the ICE session reviewed by The Washington Times. “The president has communicated quite clearly his decision that the emergency that triggered the devotion of DOD funds to the construction of the border wall is ended. But that leaves room to make decisions as the administration, as part of the administration, in particular areas of the wall that need renovation, particular projects that need to be finished.”

The Times said that Mayorkas specifically mentioned those “particular projects” included “gaps,” “gates,” and areas “where the wall has been completed but the technology has not been implemented.”

The report noted that the new completed section of border wall is more than just a wall as it includes technology that allows authorities to detect incursions and features “high-speed roads” that allows for rapid response. The report also highlighted recent polling that showed that the majority of Americans, 53% overall, support construction of the border wall.

More than 11 days have passed since Biden’s 60-day order halting border wall construction expired, as hordes of migrants take advantage of gaps in fencing to reach the US. 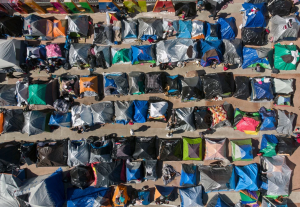 Homeland Security Secretary Alejandro Mayorkas and Defense Secretary Lloyd Austin were due to present the commander-in-chief with a plan on how to proceed on former President Donald Trump’s border wall construction on March 21, according to Biden’s own presidential proclamation.

Politico reported last month that Biden was under investigation by the Government Accountability Office for halting billions of dollars in payments that were scheduled to go out to companies that had been contracted to finish building the wall.

“Now the Government Accountability Office is launching a review to determine whether the new president broke the law by freezing the money in violation of budget rules designed to keep Congress in control of the cash flow,” Politico reported. “The probe highlights the challenge presidents have historically faced in fulfilling campaign promises that require money to be spent — or suspended — at odds with Congress’ intent.”

The report comes as Biden’s border crisis has overwhelmed the U.S.-Mexico border, promoting backlash against Biden from Republicans, Democrats, and even the president of Mexico.

455 miles of new border wall was built President Trump administration. President Biden has enough cash left – about $3 billion – to finish another 200 miles. According to the Army Corp of Engineers about 39 fence projects across the border stand idle. Biden voted to build 700 miles of border protection in 2006. Today he calls them useless, inhumane, and unnecessary.

Critics also say the fence is harmful to wildlife and the environment and are urging the president to use the excess cash to restore habitat.

“We need to not just stop building the border wall, but actually begin restoring the land, healing the wilderness areas that have been destroyed by wall construction.”

Trump ordered a border wall ‘system’ which includes cameras, lights and underground sensors – which provide agents with “situational” awareness of the border environment. Those amenities are the last to go in, meaning taxpayers already paid for many miles of fence and materials they may never receive.